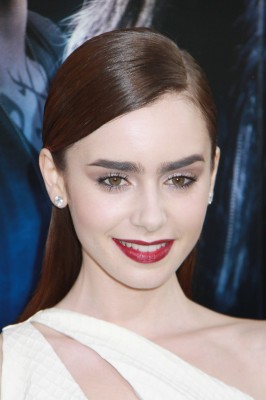 Lily Collins was already a fan of the book series The Mortal Instruments before she was cast, and we have the behind-the-scenes story of how she got the role. Even Hollywood stars need to work to make opportunities happen in order to play what they want.

“What I did was I read the first one and found out they were making it into a movie so that’s when I sent out emails and calls. I was like, ‘What’s going on? Who’s involved? How can I get involved? How can I audition?’ And then continued to read the series. My mom then read the series because she always loves these kind of books as well. But then when I was cast, I stopped reading because when it comes to transpiring a story that spans that big of a time gap, I didn’t want to get confused as myself, knowing Clary’s future. You never know your future in real life, so why would Clary? I didn’t want to get convoluted with information. And then especially from script to script, we had so many reincarnations of the script that it would get so confusing as to what I was supposed to know. So I really just tried to focus on the first one, reread the first one, and then just kept kind of going over the script. So now that we’re on the second one, it’s all about the second book and not trying to focus too heavily on the third. Obviously, for the writer and production and all that, they need to know characteristics and the future to introduce hints now, but that’s up to them. I’d rather just focus on one at a time because I don’t want to act differently than I should. It all gets very confusing.”

“To go to something that you just said before I answer, when you’re saying now it’s harder as a journalist because everyone’s kind of self-reporting and people are tweeting answers to things that you’re not even asking but then takes away from a question during a junket. We’ve been tweeting along the way of the mall tours like to give an insider’s look to the mall tour. But I personally have not been tweeting or using Facebook or anything like that because I — and this could change, I’m not saying never say never — but I love old Hollywood and the fact that there was a sense of mystery about actors. And junkets were junkets for a reason. Interviews were interviews for a reason. Barbara Walters’ most fascinating interviews was like [GASPS], you needed to watch it because it was like, ‘What am I going to learn about this person I don’t feel like I know anything about?’ And I want to be approachable and relatable to everybody of course, but there are other ways of me doing that. I feel this kind of all the time influx of information to people that they’re not even asking. It takes away from an interview situation or a junket situation. It’s kind of this constant information about myself that I just don’t necessarily think is important. It’s interesting to hear because of course on the other side it does make journalism a little bit harder because all the questions are already answered without you having to ask them anymore. But there was a moment when I realized that if people start to know me so well as Lily interviewing and as my personality, they won’t believe me as a character as much. If they know me so well as being like happy, this personality and whatever, then I can’t play that gritty girl who is a loner. I mean, I could — I would hope that I could. I hope that I could prove myself. But I’ve done that where I’ve watched a movie before and I’ve been like, ‘Oh my God, I just heard about the best pizza they had last week and now I’m watching…’ It’s weird. It’s stupid. It shouldn’t take you out of a movie. But I just feel like when you have so much information thrown at you about a certain person and some of it is just so silly… It’s funny to read. It’s great. I love that you can read these things sometimes and it’s funny. But for me, personally, I don’t want somebody watching a movie of mine and being like, ‘I saw a bikini shot of them the other day.’ If it’s taken by paparazzi, that’s out of my control. But if I’m going to tweet a picture of myself in a bikini, then if someone’s watching a movie and I’m supposed to be this really gritty character, and they all of the sudden get taken out of the movie because they remember that picture… I see a movie as an experience. Like when I watch a movie with someone like Natalie Portman or Meryl Streep or the women that I admire, Sandra, Julia, any of them, I don’t see them playing a character. I see a character. And I can only hope that one day I’m half as amazing as they are. But at least I want that same experience of watching someone play a character, not thinking about them as the person.”

At the end of the interview, I asked her if she is still interested in being a journalist. Her answer: “Yeah. One day I’ll go back to it, at some point. I still love writing so I can do that from wherever. I can do that from a trailer.”

Lily, we are looking forward to you writing a report for us! 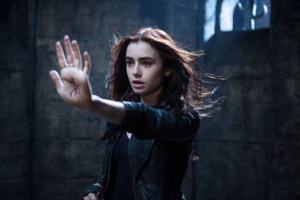