Mel Gibson directs his way back to the Hollywood elite with another potential Oscar nominated film with “Hacksaw Ridge”.

Let’s address the pink elephant in the room; it has been a minute since we have seen Mel Gibson in anything other than a TMZ video clip.  However, the one thing Mel never lacked was his incredible talent in front and behind the camera. Partner that with the, “Time heals all wounds” theory and Gibson is back to the business. In the new film, Hacksaw Ridge, Mel is solely in the directors chair and shared his secret combination to playing a role well.

But it wouldn’t be an interview with Mel Gibson if we also didn’t get Gibson’s parade of facial expressions and a bear.

Q: I was so happy to see that you hired Japanese actors to play Japanese soldiers.

Q: This film has a very large religious theme. What religions influence your daily life?

Well me? I’m a poor practitioner. I would like to have good faith, that’s why I see stories like this with a guy like Desmond whose faith is unshakeable. I’m inspired by that. Maybe I can take a leaf out of his book on some level. It’s not about religion so much as it is about faith and pure love which is at the heart of God. As far as I go, I’m imperfect. I’ll sort my stuff out in private. 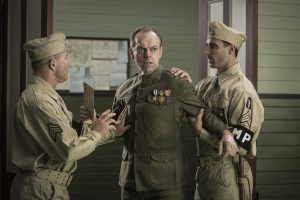 Q: Was there a reason you didn’t give yourself a role in the film?

I think the contribution by this cast is the best work any of them have ever done. I was really proud and pleased to stand back and watch it happen. They had to tread some fine lines here; Vince and our adorable friend here Sean Bean Jr. (looked at Luke Bracey) [laughs] They weren’t necessarily doing things to make you like them, but they very subtly turned to Desmond whom they all despised and ridiculed at the beginning. It was deftly done by all the performers. I want to applaud all of them because it makes me look good. Theresa, (Palmer, played Desmond’s wife, Dorothy) how adorable is she? I was in the movie. My shadow was in it. Also my arm is in it. True story, I said, “Hugo (Weaving, played Desmond’s father, Tom) come do this film,” and he changed his mind. Then the scheduling was such that he couldn’t do the scene in the courtroom, so I did it, my hand and shadow and stuff. So we green screened him in later, he wasn’t actually there. 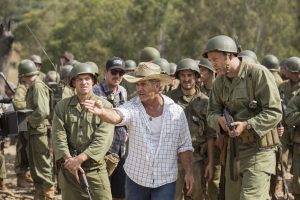 Q: What did you learn from Desmond?

Real superheroes don’t wear spandex tights. I think what Desmond shows is the most inspiring thing. He managed to transcend and get above the war. We’ve always had it, we always will have it. He’s gone above it in the midst of it and shown us a way to love. I think I already said this. That’s a vital message. The world’s in such a bad way. It’s been this bad before, and it’s going to get this bad again. It stings like a bitch. We behave like that for 20 or 30 years and they we’re back at it again. History regurgitates itself. This is hopefully a word or reminder about the viciousness and brutality. I want you to feel appalled by it, but accentuate the other side of it. In the midst of it, some good can be extracted.