Michael Lomenda explains how “Jersey Boys” is a gritty musical 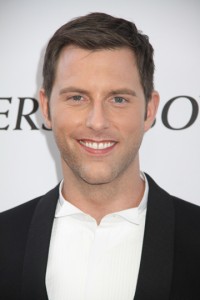 Jersey Boys sings and dances with the popular music of the Four Seasons, but as well the film has grit. Clint Eastwood directs Jersey Boys, adapted from the Broadway musical recounting the rise and fall of the 1960s boy band the Four Seasons, along with their shady past and New Jersey roots. Many elements of a well done gangster flick are tied alongside songs about “Sherry” and how “Big Girls Don’t Cry.” Michael Lomenda plays Nick Massi, a member of the Four Seasons, and also adapts using his experience with the stage production into his performance on the big screen. Lomenda talks with WhatsUpHollywood.com about his feature film debut.

Q: This is your feature film debut and it happens to be in a Clint Eastwood film. How was it working with the legendary Mr. Eastwood?

Honestly, I’m still processing it all. I think probably for years to come I’ll still be kind of living on the actor food that I got from that whole experience. It was really incredible, obviously really daunting to be cast first of all in my first feature film and second of all under the helm of Mr. Eastwood. So I spent a lot of time just trying to get my confidence up to be able to walk on set and feel like I was worthy of being there to be honest. But it’s funny. I think people have this preconceived notion of Mr. Eastwood as perhaps Dirty Harry, his Westerns and that kind of stuff. I think it’s really remarkable to see the environment he creates on set and the sort of family vibe, and he himself is a really unassuming, patient, sort of trusting director. I think that is partly because he was an actor first, and I think he recognizes that’s the best possible environment to create for an actor to feel comfortable to dive in headfirst and create spontaneous moments, and I was really surprised how collaborative he was. I guess part of me expected to walk on set and kind of be told what to do to a certain extent, because I was new to the game, but he was really interested in encouraging me and us as a group to bring this experience we had on stage to the experience of filming this movie. I just think that speaks to his respect for music theatre, and music, and me as an actor, as well as his appreciation and willingness to really tell a human sort of gritty story that I think is an incredible thing, and is so signature in his movies.

Q: The film is gritty, but a musical at the same time. How did that work?

Which is an interesting combination, and I think some people were a bit surprised maybe by chance that he would be casting part of me doing this feature film. When you look at it maybe on paper it seems that way, but when you actually look at Mr. Eastwood’s history he’s a really musical man. He’s got a great appreciation for jazz. He’s done biopics in the past. He did the Charlie Parker one with Forest Whitaker called Bird. So he definitely has a deep appreciation for music. That means a lot to be working with someone who really appreciates and respects us as vocalists as well as actors. 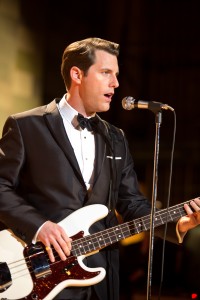 Q: As an actor what was the experience playing a different medium but the same character? Especially with direct address used in the film, compared to the stage?

Luckily I had a bit of kick in the can early on with that particular conceit, because the stage production that’s where they drew that sort of concept from. It’s kind of trendy with TV with House of Cards and even with Ferris Bueller’s Day Off. I remember that as being a sort of conceit. But in the stage production, Des McAnuff and our director and our writers actually conceived that as a way or sort of connect with the audience. So several times we kind of break the fourth wall and speak directly to the audience, which I think lends itself to this kind of medium very well. It’s a cool sort of thing about Jersey Boys, because I really think it allows people to invest in these characters, because we’re talking directly to them. And I think towards the end of the film you start to feel like you’re actually rooting for a friend or a family member or something. You definitely have a connection there. That is different if you would be doing things in a more standard way. I really enjoyed that part of it. As for performing on stage in the show with that kind of idea, when I get the chance to speak directly to the audience it really keeps it fresh every night and has allowed me to connect to the audience in a way I never really have in a show before.