Movie-goers can count on a great performance from Ben Affleck in “The Accountant”. 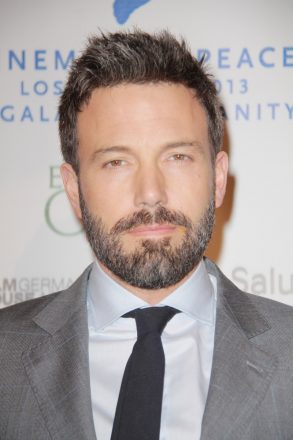 Ben Affleck is one of Hollywood’s biggest stars, and while you would think that is because of what he has shown fans on screen; Affleck is actually most respected for what he is doing behind the camera as a Director and Producer.  In his new film,  The Accountant, Affleck made a conscious effort to let go of the reigns and focus strictly on acting playing the complex lead character, Christian Wolff who is math savant with a high IQ and little social skills. That being said this character relies heavily on body language and a lack of showing any emotion or facial expressions…to  show expression. Sound complicated? That is the point, and why this was such a home run performance for Affleck. Fortunately for Affleck playing in CIA Agent Tony Mendez in the award winning, Argo gave him a great head start.

Affleck has played some resident bad boys in the past but Christian Wolff is a whole other level. So of course we had to ask the million dollar question, who a street fight between Batman and Christian? Check out our full interview below to see his answer as well as Ben sharing his thoughts on fatherhood. 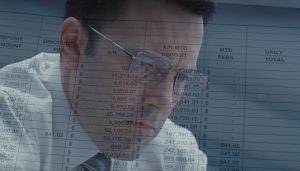 Q: Would you say Christian Wolff is the most complex character you’ve ever played?

Yes this is the most complex character I’ve played for sure. It was very challenging role and it required a lot of research.  Gavin (O’Connor, director) and I went around and spent time with people who are in various places on the autism spectrum. I observed behavior, talked to them, and gauged them from everything (such as) what their daily life was like or what a movie someone with autism likes. We got a lot of different responses, but the value to grounding the guy making him like real people we have seen in real life rather of an imagined version of what he might be. It was a cobbling together of observed behaviors and character traits from people we had met. That’s what I anchored the performance in. 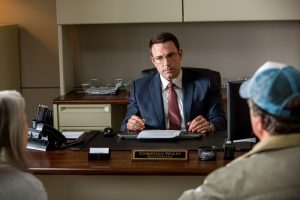 Q: Was this a difficult performance?

Yeah it was difficult, because we cared about getting it right. The last thing we wanted to do was a cartoon, or a caricature, or a simplification because it is a condition that people really have. The more complicated the better because it was more real. The people that we met who we talked to had very complicated situations, very complicated lives, some limitations, some abilities to do stuff others were challenged with, sometimes they were a genius pinball player, and you know what I mean? There’s an amazing spectrum of special gifts that we found as well. It should feel complicated, and on one hand he does have this instinct where he wants to connect very much, but some things can’t be fixed. It doesn’t connect in the way where he can put his arms around this woman and kiss her. He connected with her another way, that to me is what’s complicated and interesting about it. 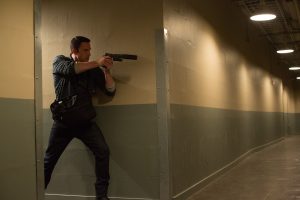 Q: In this film you have pretty physical action scenes that looked like you trained for and in the Batman movies you had training. That being said, if Christian and Batman went head to head, who would win? 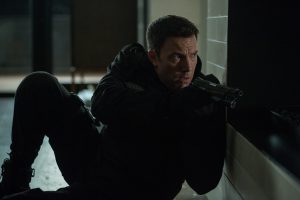 Q: Speaking of training, how much did your Batman training help you prepare for the physical requirements to play Christian?

Gavin thought the action would be good and real. It’s something he’s done in Warrior for example. So training was as much a part of this as it was for the Batman movies. It’s a lot harder for the stuntman to do your stunts when you’re not wearing a mask. So I had to really be on top of my game and work with some really great professionals who were very helpful and really good at this stuff. They were really good about educating me on the fighting style (in the film they used Indonesian martial arts, Silat) and it was a learning experience. I have a lot of respect for the guys who taught me. 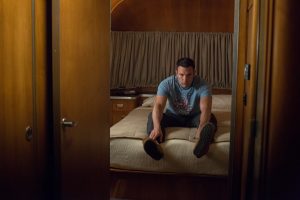 Q: What did you think about Christian’s father (played by Robert C. Treveiler)  in this film? He was very hard on his sons.

That was the most heartbreaking thing about this story. I think it was definitely moving to me. As a parent, I face dilemmas that we all do every day. What’s the right way to raise children? Every little moment there comes a crossroad, and there are a lot of different choices you can make. We all make mistakes for sure, and we all try our best. It’s driven, and when you have kids, there’s this expression that your heart is outside your body. All of a sudden, now you feel so vulnerable and this fear of your child being vulnerable is very powerful. I can see why it made for a really interesting character for the father of course, who out of compassion and fear, actually kind of brutalizes him. It’s a really interesting look at how we channel the intense emotion as parents. It’s not easy. 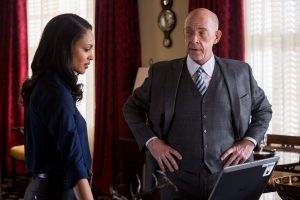 Q: J.K. Simmons plays FBI Director Raymond King in this film and you just worked with him in Justice League as well.  What was that like for you?

It was great to work with J.K.  again; hopefully we get more to work with in the future. It was a nice tease, and it’s also really cool when you do a part in the movie, you don’t know what the other actors are doing, it’s compartmentalized. It’s a real treat to go and sit down and watch the movie and go, “Oh, that’s what they were doing.” I should have brought my A-game, they’re pretty good.” It’s like bringing the special effects into the movie you know? You’re just out there with a green screen and a tennis ball and you watch the movie and it’s and asteroid coming towards earth or something. It’s surprising how great these guys’ storyline was and how they carried the film. The acting was tight and sharp. I was just psyched to be in a movie with him.