Mr. Nice Guy Steve Carell became a jerk in “The Way, Way Back” 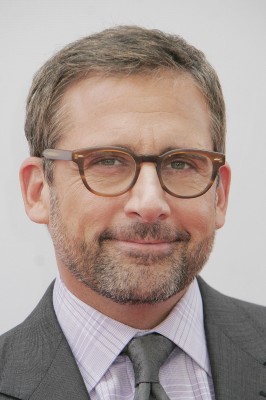 Funny and nice guy, Steve Carell, played up his dark side to portray Trent in The Way, Way Back. In the beginning of the film, Trent delivers really harsh words to Duncan, the fourteen-year-old son of Trent’s girlfriend. Those harsh words were based on actual events captured by the director/writer/actor of The Way, Way Back, Jim Rash.

How did Carell capture his dark side? Is this the rebound to playing Mr. Nice Guy for so long? And does he have any The Office memories to share? Carell answered.

It’s the backlash [LAUGHS]. I thought it was a really interesting character to play. I didn’t necessarily see him as a bad guy, maybe not somebody you would define as a nice, warm-spirited person. But I guess the best comparison I could make was when I was growing up, I played a lot of sports and had a lot of coaches who were very tough on me. And that’s sort of the way I see this guy. He thinks he’s doing what’s best for this kid with the tough love and the character building and the brutal honesty. That’s his method but it’s I don’t think a very effective method. I don’t think anyone is as mean or as nice as you think they are. Yeah, I think there are dark aspects to me, I’m sure, but not perhaps that dark. 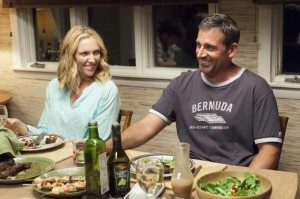 Carell is also Mr. Busy Guy. After he left The Office, he has been in one film after another. How does he find time for family? He confessed he was going to pass on The Way, Way Back to spend time with his family but then a miracle happened.

This we shot in my hometown during the summer because I had initially told them I couldn’t do it because I wanted to spend the summer with my family. And they said, “Well, where do you spend the summer?” And they scouted it and they said, “Oh, that’s perfect. That fits our needs for The Way, Way Back.” So that worked out great. We shot the movie where my wife and I live during the summertime. And maybe five or six houses down is our family beach house. That’s where we spend the summer. I would tell people where to go to get the best lobster roll and stuff like that. 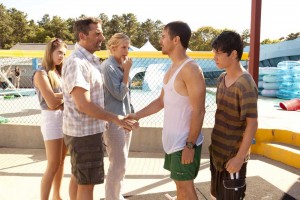 Okay, speaking of The Office… He kept it a secret that he was coming back for The Office finale. How hard was that?

We knew all along that we wanted to have some sort of re-visitation. The question was to what extent. And I was always of the mind that it should be very, very subtle and very slight. I wanted to come back as a tip of the hat to the show and the cast and to thank them and the people who watched. But, at the same time, I didn’t want to take anything away from it because this was their finale and this was their summation for their characters. So I didn’t want to take away from that. So for me, the trick and the key was to just come in and be able to achieve both of those things. It was hard to lie to people constantly. Like every talk show I went on, I was just lying. But we just thought it would be fun that people didn’t know for sure. It’s so interesting that everyone wanted to know the truth and the answer. But I thought, do you really? Wouldn’t it be more fun to be surprised and have that as sort of a little — I don’t want to say gift, that sounds presumptuous — but for the fans perhaps. So we tried to keep it under wraps as much as we could.