Pedro Almodóvar was too excited on his new film “I’m So Excited!” so he revealed a secret about Penelope Cruz!! 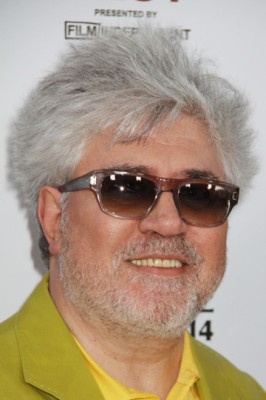 Spanish film master, Pedro Almodóvar, who boosted the careers of Penelope Cruz and Antonio Banderas to international superstars, talked about his new film I’m So Excited! The film has these two actors appear in star cameos. Have they changed since becoming Hollywood stars? What does Pedro think about these two great actors on a personal level? While he was answering my questions, he accidentally slipped and revealed the gender of Cruz’s second child!

They have changed in the sense that Penelope started off as a 19-year-old and is now 39. She has a son and in a few days she will have a baby girl. She’s a mother. She has a husband. As a woman, she obviously has changed as she has become an adult. But, as an actress, I actually might say that she has not changed that much. And she has something great, especially in comedy, and she hasn’t been exploited as much as she could be in comedy, but particularly in that mix between comedy and drama. She’s got a very special quality about her. You can really place her in very extreme situations, especially very painful situations, as for how her character interprets it. And sometimes, the deeper and more human that pain is, the better she is at it. And fortunately, she continues to be a gorgeous woman and the camera loves her. And I do, too. Antonio, of course, started with me and the kinds of characters that he played, that we did together in the ’80s, were these very crazy characters mostly determined by their passion. And so, unlike Penelope, once Antonio came to the United States and started making movies here in the States, he also moved to the States, formed a family here in the States, and in some ways became an American actor and a very successful American actor, whereas Penelope has always kept a foot in Spain and Europe. She has continued to make European films. In their relationship with me, they have not changed. They are exactly the same human beings since the first time that I met them. And it’s the same with Antonio. When we are together, he reacts to everything in the same way that he did 30 years ago when we first started. So they became important for me in both senses. They are two actors that I am very familiar to them. I have the advantage of having a very good result with their work, but also they belong to my emotional family.

Watching I’m So Excited! I think Almodóvar must have fun when he is flying. However, he denied that.

I’m a very dull passenger. I don’t speak. I don’t have sex. No alcohol. I don’t do drugs. So I’m a very dull passenger. The thing that I like about flying is that I feel like I can really concentrate. I used to write many things and many ideas for my movies that belong to this moment where I’m not anywhere specifically in terms of time and space and geography. I am suspended and this suspension fits me very well. So I enjoy very much writing and reading on the plane. 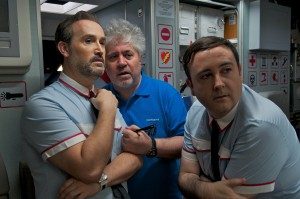 Years ago, Almodóvar came out and it seems he is comfortable being himself and writing gay characters. But I’m So Excited! seems to be the most “gay” film he’s ever made. What direction did he give to his actors?

As you know, in my movies, this is not the first time that there are gay characters. But I didn’t ask the actor to make anything that could be more effeminate or flamboyant. Also, to be gay is something very normal. I mean, of course there exists flamboyant gays, but I was more interested in the story. So, for me, whether they’re sexual or bi-sexual or transsexual or homosexual, it was not a big deal. But in this specific film, I think this is part of the genre, that for our comedy I deliberately, consciously wanted it to be very queeny gay people because it was much more fun. Also, it’s something that’s related to the rules of theater. I saw them as masters of ceremonies in a theater play. And then for them to be as flamboyant as they are, I got the feeling that it was perfect for the story. So that’s why. The three of them… it was funny that period because they are not gay and they have to offer me different kinds of being very effeminate. It was difficult because I didn’t like many of them. They offered me an example, “You want me to be like someone in the night?” They know “in the night” in Madrid. And I say, “No, no, no, no. Not that type.” They were looking for someone just to imitate and I was with them. That was at the same time very funny and a lot of work for them and also the choreography. They are very generous. They were rehearsing because, of course, they don’t dance and they should. They were rehearsing for a month and a half. 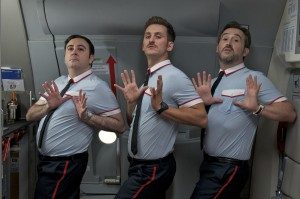