For De Niro and Travolta, the Hunt is on in “Killing Season” 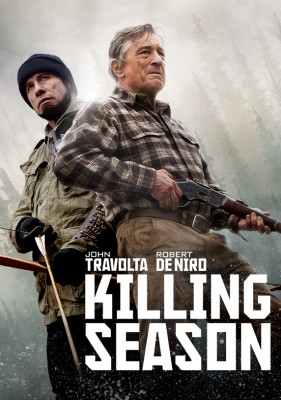 Benjamin Ford (Robert De Niro), is a former soldier who has now retired to life in the mountains away from society.  Avoiding attempts by his son Chris (Milo Ventimiglia – Heroes, Gamer) to get him to interact with his family, Benjamin enjoys hunting in solitude.  One day, Ford picks up Emil Kovac (John Travolta) in a rainstorm, and they strike up a friendly relationship, even agreeing to go hunting together.  It is during this hunt that Kovac reveals the prey he seeks is none other than Ford himself, and they share some military history at some point in the past.

Killing Season surprisingly marks the first time De Niro and Travolta have shared the screen.  It is a bit difficult to judge the authenticity of Travolta’s Serbian accent from this trailer, and its believability will be a determining factor in people’s enjoyment of this film. The use of hunting bows is impressive, as their relative silence brings immediacy to the battle of these two men.  In a quick shot, the trailer also shows the dangers of drinking too much Jagermeister: you’ll try to kill your drinking buddy.