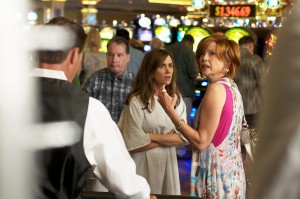 Once again, the beautiful, talented, hilarious (is it obvious that I love her?) Kristen Wiig (Bridesmaids) plays a woman hitting rock bottom after her illustrious career goes south in Girl Most Likely. After a nervous breakdown, her character, playwright Imogene, is forced to stay with her negligent mother Zelda, played by Annette Bening (The Kids Are All Right). Imogene discovers Zelda is shacking up with a compulsive liar and has rented out her room to a strange young man, who later reintroduces her to the joys of “normal life.”

As far as I can tell, this trailer has all the makings of your typical quirky indie comedy – rocky relationship with an oddball parent, weird sibling, bizarro stepfather-figure, and a manic pixie dream guy (though I hope Darren Criss’s character goes beyond this trope.) It’s got a likeable enough cast, but are they enough to carry the film? Shari Springer Berman and Robert Pulcini share director billing here, and previously teamed up on The Extra Man, which was also riddled with peculiar characters portrayed by a charming cast, but didn’t really hit enough of the laughter marks for me; I’m hoping this film doesn’t follow suit. Girl Most Likely comes to theaters in limited release July 19th.