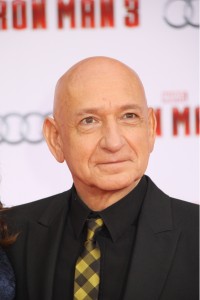 Longtime Marvel fans have been waiting with baited breath for the onscreen appearance of Iron Man’s most iconic foe: The Mandarin! Their patience has finally been rewarded in the form of no less an icon than Sir Ben Kingsley. For his indelible interpretation of The Golden Avenger’s classic arch-nemesis, Kingsley credits screenwriters Drew Pearce and Shane Black.

“It’s all in the script. Drew and Shane presented us with a wonderful document. There’s very little straying off the written word. Whenever we do improvise, it’s minimal. Just to maybe sharpen one or two ideas that we were playing with on the set but it’s all there and I do respond to the written word. I love to see it down there on the page and it was all there. It’s a great script and we stuck very closely to it.”

Iron Man star Robert Downey, Jr. offered a different assessment of Kingsley’s contributions: “Once we let him off the chain, we found that he was a glorious improviser. And a lot of ideas were just flowing out from what was written.”

Kingsley also enjoyed imbuing the Mandarin with a sense of grandiosity, rather than making the character merely acting out of sheer villainy.

“In his little broadcasts, I try to give the Mandarin a rather unnerving sense of righteousness and make him more a terroristic patriarchal. And that’s where the timbre of where he comes from. And his weird iconography was disconcerting. And completely scatter any expectations of where he might be coming from. Again, the line, “You will never see me coming”, voices this unpredictability.” 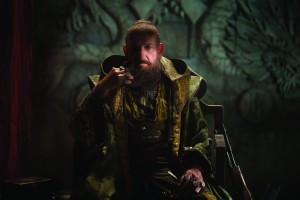