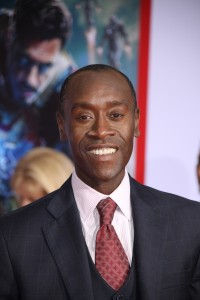 Iron Man is back, and so is DON CHEADLE as Col. James “Rhodey” Rhodes, the man in the other iron mask. Cheadle discussed returning to work with Robert Downey, Jr. as well as writer/director Shane Black, whose previous credits include “Lethal Weapon”, “The Long Kiss Goodnight”, and “Kiss Kiss, Bang Bang”.

“It was great to come back this time around. Shane almost coined and really put a stamp on these sort of buddy action movies where I was clearly in the pocket with Robert. I saw Sir Ben twice on the set. It’d be great to be able to mix with these guys a little bit more, but we had a ball, and Robert is a prince as you all know. “

In “Iron Man 2”, Cheadle donned the armor of War Machine. This time around, his suit has a splashy new paint job and nom de guerre: Iron Patriot! Which did he prefer?

“Well, the Iron Patriot is about three kilos heavier so I prefer War Machine. A lot of fun for me in this one was being able to do action outside of the suit and getting to work with the stunt team and doing the cable work. That was a big thrill. Like I was a big kid being able to play with the best toys.”

The highlight for Cheadle was exploring the deepening friendship between Tony Stark and Rhodey Rhodes.

“After the second one, Robert came to me and said, “Let’s try and really kick this relationship off and really try to see who these guys are.” So I think you see the relationship is strengthened in this one and it sort of pays off on the promise that I think was made at the end of “Iron Man 2” in the Japanese garden where these guys really started busting each other’s chops back to back. They’re friends but they still really help balance one another and I thought that really came to fruition in this one.” 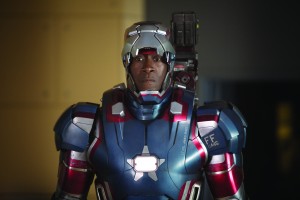