Want to know more behind stories? “Onward” star Tom Holland shares how he enjoyed his art imitating his life – and no clicks, likes, or shares were used in the process 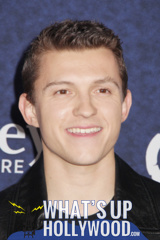 Being oldest in the siblings are benefit or just showing bad sample to youngers? Tom Holland played younger brother in his new animation film, but real life, he is oldest brother in four boys. What advises he gave to his youngers?

Q: Could you talk about your characters?

I think it’s interesting. I’m the oldest brother of four and Chris (Chris Pratt, played Barley) is the youngest brother of two and a sister. So we kind of switched, so now I’m playing the younger brother and he’s playing the older brother, so it was really nice for us to kind of make that switch. And because Chris and I were obviously so close already before we even came on to this film, it was almost like we were just playing ourselves, but the similarities between Ian (Tom’s character) and myself go back to more when I was sort of in my early teens, 12, 13.  I was a little bit of an introvert. I was a very nervous kid and I had a hard time in school. It wasn’t until I went on this adventure that was Billy Elliot (the musical) where I sort of came out of my shell and I became more confident in myself and I believed in myself. And what drew me so much to this character was that we get to see that entire journey that I went on as a kid in him throughout this film.  So I just was really happy to kind of pull my past experiences into this process, and I’m really delighted and thrilled to where we got to. 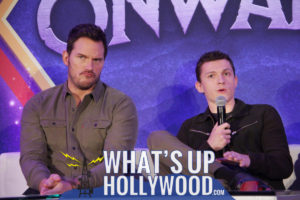 Q: What did it mean for you to enter the world of Pixar for the first time?

I think for every young actor, you set yourself goals, and I have mine that I’ve set out since I was a kid and they’re still the same today. One of them was being in a Pixar movie. So when you guys were kind enough to fly all the way to London to meet me and to tell me your story and to then pitch me the movie, I firstly was just so honored. This is the first time anyone had come to me. I was like “This is amazing.  And it’s Pixar.”  So it was a very easy decision. I was, you know…  You don’t say no to Pixar because they’re the best. And the nicest thing about it is they have this kind of family feel that Marvel also has, and I feel like, and you can say if you felt the same, that we were welcomed into this wonderful family with such open arms, and it was such an amazing process. And, I still can’t quite believe that this film is about to come out. It feels like yesterday that we started working on it. So I’m just super pumped for people to see it and to experience this amazing thing that we’ve all created.

Q: Did you actually get to be in a booth with Chris to do the voicing or did they separate you in order to get work done?

You’re like “Yeah, sure.”  In another booth. “Yeah, [make buzz noise] just do as you’re told please.” 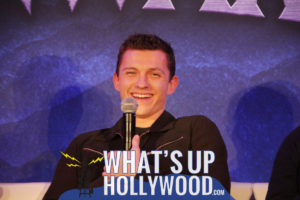 Q: If you could bring back one person for a day, who would it be and what would you do in that 24 hour period?

Uh, my granddad, Bob, he never actually met his dad. His dad passed away when he was 18 months.  So I would bring back my great-grandfather so my granddad would have the opportunity to meet his dad.

Q: What the movie kinda says that you need to get out and explore versus sitting in front of a TV or a screen?

I think the film being called Onward, the only way to go Onward is to look forward, and you can’t look forward if you’re looking at your phone. And that’s… for me, like I’ve deleted my Instagram, to Disney’s dismay. They’re like “How are you gonna promote the movie?”

I think the film is kind of a metaphor for like look out, the world is an amazing place, it’s a beautiful place. Experience it through your own eyes, not through someone else’s Instagram account, you know? 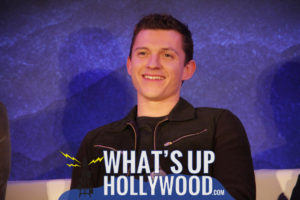 Q: What have you taught your siblings?