Oscar Isaac grew as an actor working on “Inside Llewyn Davis” 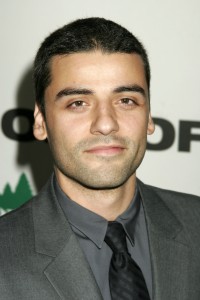 Guatemalan-born American actor Oscar Isaac plays the Welsh musician of the title role, Llewyn, in Inside Llewyn Davis, and clearly enjoys portraying different ethnicities and nationalities. He has played Joseph in The Nativity Story and Prince John in Robin Hood. With this role, he continues his lucky streak and shows what a talented actor and musician he is. What was it like working with music legend T Bone Burnett and what did he learn from him? 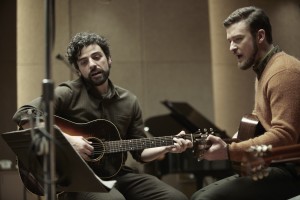 “Everything! He completely changed not only how I listened to music but the way that I play music. The first thing we did, we went out to Tarzana to Norm’s Rare Guitars, and we found Llewyn’s guitar, which is this guitar from 1924, this little L1 which rock ‘n’ roll was invented on. That’s the Robert Johnson at the Crossroads guitar. We joked that I made a deal with T Bone, made a very special deal. Then he took me back to his home studio, and first thing he did was put on Tom Waits’ new record and left the room for an hour. He was like the musical Mr. Miyagi; an invisible hand guiding me, telling me what to sound like, just stripping away any artifice.”

His co-star is a cat, which he had to take on the subway and on a road trip. Let’s ask him about his relationship with his fickle, hairy co-star. 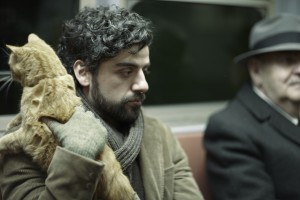 “They had about four different cats because it’s very hard to train cats, or impossible. They just attached the cat to me and told me to walk or run in the subway. Sometimes the cat would freak out and scratch me and sometimes it wouldn’t. I don’t recommend it.”

Actors dream of working with the Coen brothers, especially playing a leading role. What was it like to have this particular dream come true? Did he feel that he grew as an actor? 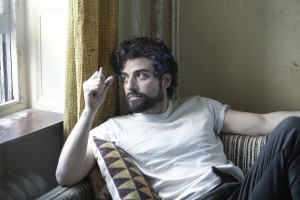 “Not to look for compliments from the Coens, ’cause they don’t give many. So that was really refreshing. The first week they’re not saying if it’s good or not so you hope it’s going okay. But after that first week, you don’t look for it anymore. So it’s almost a relief because it’s not about a constant judgment, it’s just about the work and about figuring this thing out. It’s really a nice way to work actually. There’s a reason why actors are always dying to work with the Coens, because they just set the stage for you to do your very best work, and apart from the movie, their friendship more than anything. They brought me into the world of viewing how we feel about art and life that made me grow as a person and obviously actor as well.”