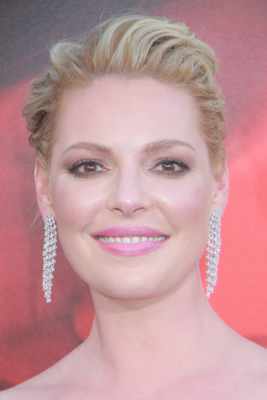 Katherine Heigl has played some of the most loveable and memorable roles on TV and in films, but her role in the new thriller, Unforgettable might be one of her best yet. Heigl plays Tessa Connover the ex-wife who seems to have forgotten the “ex” part and becomes the baggage from hell that her former husband David (played by Geoff Stults) and new fiancé and then wife, Julia (played by Rosario Dawson) can’t seem to, well….forget.

The Hollywood veteran actress was a part of the press junket for the film, and then I was lucky enough to steal her for a few more personal questions. 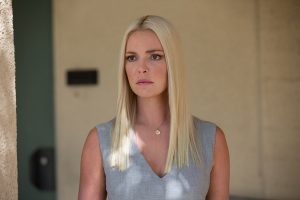 Q: Tessa’s movements and mannerisms are so measured and precise. Even her posture seemed perfect at all times. Did you draw that from someone in particular ?

Not from anyone specifically. It did cause a lot of back pain though after a while. I was like “Uhh, uhh,” at the end of the day. Yeah, she held herself very stiffly. But I think a lot of that again, I have a tendency to do that at times when I am trying, when I am nervous, or I don’t know when you’re trying to contain yourself, or something. Everything tends to tighten up. And that was Tessa. And she was just so wired and so tight. 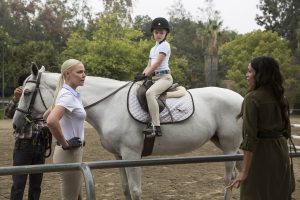 Q: Is she in denial, about how much she’s gone through in her life with her own mother?

I think she’s in huge denial, and I think she’s repressing so much. She doesn’t even, does she even really allow any real emotion to come out when her mother hurts her feelings or makes her feel small? Nothing, she contains it all. And somebody who does that, I’ve done that on occasion, where I just sort of stuff it down, stuff it down and then you have, well I usually don’t try to kill people, usually [laughs]. 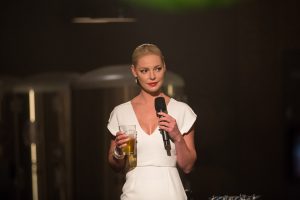 Q: How did you approach Tessa?
I think for me it really, really starts with the compassion. I had compassion for Tessa, and I felt sorry for, and I kind of identified with her fear really. And so her crazy is really born out of insecurity and fear, and the idea that she just is so terrified of not being perfect, of not achieving perfection in her life, in her marriage, and with her child and in herself. She I guess has some idea that if she doesn’t her whole world will fall apart. So the desperation to hold on it and to maintain it is what drives her to make choices that any sane person wouldn’t make. So I kind of just started, in order for it to not feel, it certainly is over the top, because again most sane people don’t, I don’t know if even, no sane people. We’ve heard of people making insane choices, but it’s rare, so you want it to feel extreme. Yes, but honest I guess. There’s a reason for each one of these choices, for why it goes further and further and further. Because she’s not getting the results she wants. So she goes one step further. And even in the moments with, talking about Isabella (Kai Rice, played daughter, Lily), the hardest thing I had to do was make that little girl cry. And it just, even now, it feels so terrible [laughs] It’s the hardest thing I had to do. And that’s when I started to lose a little bit of my compassion for Tessa. And I had to find a way to understand why she was doing this. And to do it from a place of again she truly believed she’s right. She truly believed she’s doing the right thing for her child. She’s teaching her a very valuable lesson. You only have one mother, and don’t alienate me. And all of it was coming from a place of sincerity. It wasn’t just to be outrageous and just to be crazy.

Here are our exclusive story!

Q: In this movie you play a strict mom. In your real life, with your three kids, are you super strict, or do you let them do what they want?

Q: How about cell phone, iPhone, and iPad use? Do they have curfew?

I do let them play on their iPads. I really hope that the games are educational. I should really look at that. But generally, no. I just recently started saying to Naleigh, “No iPad, let’s read a book.” She loves to read, and I want to encourage that. And it is very easy sometimes as a parent to just go, “Just go play with your iPad,” because it’s like a built in babysitter. But it does take away imagination. It takes away quiet time where you’re just forced to use your own imagination to entertain yourself.

Q: You adapted Naleigh from Korea. Is she learning Korean?

No, we haven’t started that yet. We’re up in Utah, it’s a little difficult. But my sister is Korean and she started having children first, so my mother is Halmeoni. It’s the only Korean word we know, which is Korean for grandmother.

Q: Can she use chopsticks?

Oh, she’s really great with chopsticks. Yeah, she has been since she was like three years old.

Q: Girls and boys are different to raise. So how is it now that you have a son?

Yes, he is just only three and a half months old but he is already exhibiting such boy, he’s so much less emotionally complicated to me than my girls in a way. Like when he’s happy, he’s purely happy. When he’s upset, he’s upset for reasons we know. Like he’s hungry, he’s tired, he’s lonely. That’s it. When my girls, now when their infants they’re all like that. But I’ll be interested to see as he gets older if that sort of maintains, if his emotional needs are just that clear [laughs].

You can also learn more about Katherine and her attentional projects by visiting her official website,  www.kheigl.com