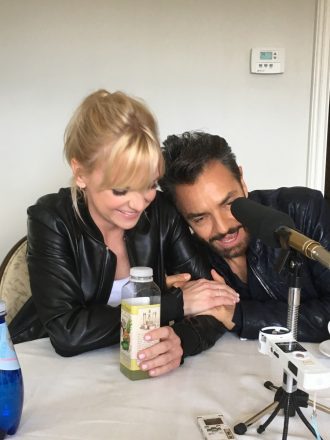 With another film reboot on the horizon, we chat with stars, Anna Faris and Eugenio Derbez about their new film, Overboard, a remake of the 1987 classic starring Goldie Hawn and Kurt Russell.

We chat with the funny duo about the film, and Derbez’ crush on Goldie Hawn who ironically shares many of the same traits Faris has. Yes, Anna Faris is his 2018 Goldie Hawn. 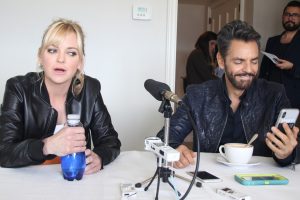 Q: What is it like going to work everyday with an Oscar winner? (Allison Janney, Mom – TV series)

Anna Farris: I am so lucky that I get to drive to work every day. I get to act with my best friend. I love her so much. I’m so happy for her. And she did bring her Oscar into work that Monday. I got to hold it. If I’m being honest, it would be difficult if I didn’t like her. “Hmm. Oh. She gets another one.” She showed it off and said, “You want to hold it?” I sure did.

Q: You guys have great chemistry in this movie.!

Eugenio Debez: We found the great chemistry since day one, right?

Eugenio Derbez: We found the great chemistry since day one. She was awesome. We would read together. You like me and I like you. 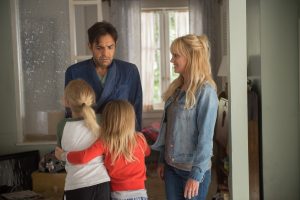 Anna Faris: It’s the school of big eye acting. I think it was seven months before we started production that they asked me to come in. I don’t know if Eugenio was familiar with my previous works, Scary Movie1, 2, 3, 4. Not 5 I hope.

I was a huge fan of Anna. But you know when you meet your co-star, you never know what’s going to happen sometimes. Chemistry. You have to work with her.

Anna Faris: I can’t imagine you not having chemistry with somebody else.

Eugenio Derbez: No way. You were so easygoing and so smooth and everything. But…

Anna Farris: Until you made me get into the water again.

Eugenio Derbez: Well , she’s a trooper. She went into the cold freezing water many many times and I didn’t. [laughs]

Anna Farris: I like to bring that up. The passive aggressive wife. Everything she has to do for you. 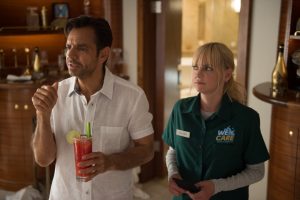 Q: How did you cast Anna for this role? Since you are the producer, did you have her in mind all the time?

Anna Farris: Yes I know and that makes me jealous.

Eugenio Derbez: My movie star crush when I was young and she looks like Goldie Hawn. She looks gorgeous.

Eugenio Derbez: And we love her. We think she’s one of the funniest comedians in this country and we’re lucky to have her in this project. That’s it. 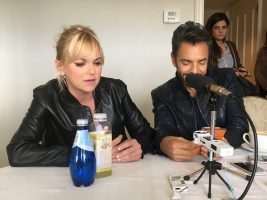 Q: So did you have posters of Goldie Hawn in your bedroom?

Eugenio Derbez: I did when I was young of course. I never ever imagined that I was going to do the remake of Overboard. I feel really honored. I haven’t met her. I saw her once in a Starbucks (coffee). This was like two years ago. We were already developing the script. She was in line in front of me. And my wife says, “There’s Goldie Hawn. Tell her you’re working on the remake of Overboard,” I said, “No. No. What if she thinks I’m not as handsome as Kurt Russell. I don’t know.” I was really scared. She told me, “Tell her. Tell her.” I didn’t have the guts to. The funny thing, three months later, my wife and I at dinner and she says, “Look who’s right next to me in the next table? Kurt Russell. Tell him you’re doing the remake of Overboard.” “No way. I’m not going to tell him that.”

Anna Faris: What restaurant was this? I want hear about that fancy place.

Eugenio Derbez: They live in the (Pacific) Palisades. I just knew this morning you had dinner with them.

Anna Faris: Yes. Well, I was in London, I was with Chris (Chris Pratt. Anna’s husband at the time) and Kurt (Kurt Russell) [and Goldie Hawn] … It was over a year ago. This sound so obnoxious as a person reading this not in the entertainment industry. I would be vomiting. He said we’re going to dinner. He said by were not as a question. He said, “I heard you’re doing that movie.” And I was like, “What is this? The most terrifying dinner.” A few hours before, my palms are sweating. Are they going to say something terrible. The way he presented it, it felt like I had my work cut out for me. By the end of dinner, they were all happy. Kurt was, “Alright, we give you our blessing.” He picked up the check. It was really nice. It’s a movie I really loved growing up.

Eugenio Derbez: But you didn’t talk about the movie?

Anna Faris: We did. We talked about their experience in the movie which was a lot of love and joy they had making the movie together.

Eugenio Derbez: And were they happy with us doing the remake?

Anna Faris: Yeah. Well yeah. I think so. I think that’s the impression I got.

Q: What was some of challenges in making this remake?

Eugenio Derbez: It’s tricky doing a remake because you want to be as much as possible, the original movie because you love that movie but at the same time you try do something different to make it fresh and different. I’ve seen some movies that go far from the original and its something messy that you didn’t want to do. It’s hard.

Anna Faris: Sorry to interrupt you. But don’t you think with comedy, it has to be a progression because comedy is constantly shifting and updating itself? I think what they brought to the table initially was the idea of flipping the stereotypes a bit. I really love that. It’s such a gratifying element. I’m really proud to be part of a movie that does that. 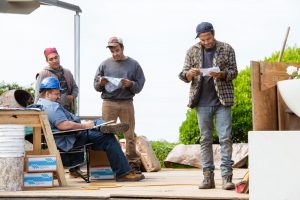 Eugenio Derbez: I think flipping the role was interesting because we were breaking stereotypes. I was always thinking if I have the chance to break stereotypes in Hollywood, I want to do that. They always offered me the same roles. You’re going to be a gardener, the cook, parking attendant, criminal or the drug lord or whatever. Now that I had the chance, let’s flip the roles. The natural thing to do was play the role of Kurt Russell’s carpenter. Let’s give a fresh look.It was really tricky and really hard and risky. It’s a beloved film. I just tell all the people and everyone that loves this movie that is an homage to the original one.

Q: What’s the biggest trick anyone ever played on you?

Anna Faris: The biggest trick? So many. There are so many. The one that oddly pops in my head. This is lame and because it’s an on the spot question. When I was in fifth grade, I wanted to be a crossing guard but I was really short and I was quiet even if you wouldn’t really think so now. I came home. I was telling parents that all that I wanted more than a pony was to be a school crossing guard. I wanted to wear that orange vest. I wanted to wear that badge. I wanted to be able to yell at kids. The next week, I became the school crossing guard. I couldn’t believe it. I was one out of three kids that were picked. I couldn’t believe it. Years later, my dad told me that he called up the school and said, “Listen. Please don’t overlook my daughter. I know she’s quiet and a little shorter, but don’t overlook her.” I remember in that moment feeling furious. Everything had been shattered. Like I thought I earned whatever reason that vest and that badge, I earned all by myself. But now as a parent, it is so wonderful that of course. Is that weirdly sentimental. It’s not as juicy.

Q: You are a Mom in real life. How has the experience of being a 1st time Mom affected you?

Anna Faris: I’m so lucky to have such amazing parents. I would do the same for my son. Although, he’ll have to earn it.

Q: Are you a strict mom?

Anna Faris: I like to think I’m really strict with manners and appreciation but I do think I’m like, “Yeah, you want some candy corn, ok.”

Eugenio Debez: Thanks for bringing this to the table. That’s what I would like. It’s not like it’s a must in every movie, but I think that’s America. That’s the real America. If you go into any store, you’re going to find Cubans, Mexicans and Chinese. You don’t find that in Mexico. In Mexico, you walk into any place and there’s Mexicans everywhere. Here, you find this diversity. I think that’s life in America. I don’t want to forget about my people. I’m very conscious that I’m here right now and working here in this industry because I got my support from my people. They’re the one who filled the theaters. Makes the box-office numbers, so I’m really grateful and that’s why I always try to include when I can and when it’s organic. Some Spanish. Some Latinos. Probably in the next movie it doesn’t make sense and I’m not going to do that. Once again, I try to make them a part of my world because they are. It’s like a way to recognize their work.

Q: Are there any other films you’d like to do a remake of?

Eugenio Derbez: Yes. There are many. I remember the first movie I wanted to remake was, Being There. Everyone was like, (is it) same like this one, “No. It’s a classic. Don’t touch that one because it’s really risky.” Let’s see what happens with this one and I’ll see. That’s a perfect vehicle for me. 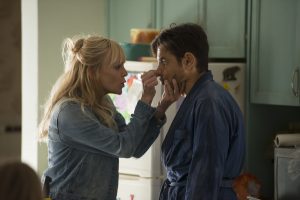 Q: You guys are so funny in real life too. Where did your comedic timing come from? Your parents or your Uncle?

Anna Farris: Wait. He didn’t know he was funny? 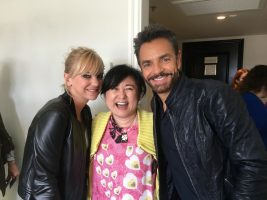 Eugenio Derbez: I think he knew. He was really funny. I learned that by watching him. His behavior. And he was really funny because he was serious. He would say non-sense and stupid things.

Anna Faris: My family was really funny and I was the serious kid. I think it had to do with feeling really awkward and wanting to feel heard. Truly my height defined me for a really long time. My whole family is relatively tall and I just had this need to be heard, “Someone’s going to hear me. Someone’s going to hear me.” That sort of sincerity, the passion that I had, that’s why I got cast in the first Scary Movie. I think Keenan Ivory Wayans was like “That’s funny. She has no idea why.”