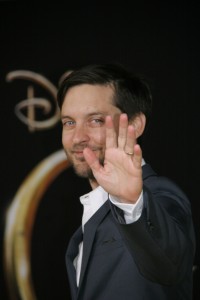 Tobey Maguire, a.k.a. Spider-Man, plays Bobby Fischer who became famous during the Cold War era as a genius chess player. I think Bobby is one of the first celebrities who had to deal with fame and its media coverage. So when I asked what Tobey learned from Bobby on handling fame, he answered, “I’m now wearing a paper bag.” Maybe he didn’t know Shia LaBeouf already copied that! And what else did he learn from this film? 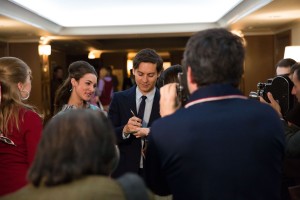 Q: How do you see handling fame as a pressure and did you find any tips on dealing with fame? 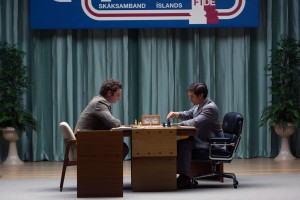 Q: Shia LaBeouf did that.

Oh, he did do that, didn’t he? Wow, that’s his move then. I’m going to let him take that one. Yeah, I got to figure out a new move. I didn’t take any tips from Bobby really about his reaction to it. I think it can be kind of jarring. I certainly in my own life understood that one could get famous and even is likely to get famous when you do movies at a certain level that are likely to get out there and have a certain level of awareness. But it doesn’t quite or it didn’t quite prepare me for the reality of what that meant in my day-to-day life. Like anything in life, something comes at you and you try to understand it and make adjustments to make it tolerable and even positive if possible. Bobby, I don’t think, spent a lot of time kind of like learning or growing past certain things socially. He really was focused on chess and was fairly antisocial. 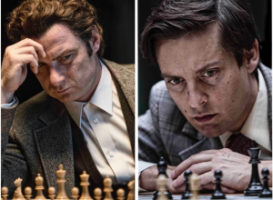 Q: I read that you played chess as well but you’re also good at cooking. So which one is better, cooking or chess?

What I learned in this movie is that I am not a good chess player. I’m good enough to not play. I know enough about it to not play. It was sort of discouraging as I was learning about chess and talking to international masters and grandmasters and what it takes to be really, really good at the game, and the truth is it just takes a tremendous amount of time. You have to play a lot. You have to study a lot. There’s a tremendous amount of memorization, so just basic memorization, understanding opening sequences, and then of course, there is theory. But you could flash a position to somebody who is a really high level chess player, and somebody who is not, and you might have a hard time figuring out where one of those pieces went. And an excellent chess player, most of them will probably be able to set up the whole board and have looked at it for like a second. It’s just they’re so familiar with it. So I have determined that it would take me years of playing every day for hours a day to be any good as well as studying, reading, studying past games. So it was somewhere in there that I determined that I was not going to pursue that.