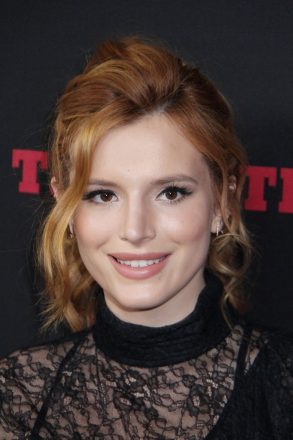 If you follow young Hollywood, then you know one of the biggest young stars todays is, Bella Thorne. Best known for her roles in Shake it Up, The Duff, and Blended, Bella now lends her voice to the character of Cora in the animation film Ratchet and Clank. Based on the video game series that goes by the same name, the film also stars Sylvester Stallone, John Goodman, Rosario Dawson, and Paul Giamatti.

In our interview with Bella she shares her video game  and dance skill level, why she is similar to Cora, what her thoughts are on fame, and what she wishes she could do over.

Q: How did you channel Cora?

Cora is really very similar to me. It was pretty easy just because she’s very tomboyish. I don’t look tomboy right now, but in my personal life I’m very much a tomboy. And she’s very much sarcastic and I’m so sarcastic, but sometimes it comes off bitchy. And I think that some people think her character is a little bit bitchy because she comes off as so sarcastic and harsh toned. That’s how I am naturally anyway. I love you if I’m doing that, so it’s cool. And then I wish I could kick Galaxy butt. I haven’t had that chance yet, but if I did I would do it just like Cora does it.

Q: Do you play video games?

I like to watch somebody play the games because my hand eye coordination skills are really bad. You have no idea how many times I’ve tried to play Call of Duty and be good at it. And I’m just not good at it. But my brother is huge video game addict. When I told him that I booked this role he literally was like, “The movie?” And I was like, “Yeah.” And he was like, “The video game?” I was like, “Yeah. They’re making a movie out of it.” He was like, “Oh that’s cool.” Then when I said I was doing the game he was like, “The video game?” “Yeah.” “Dope.” I got the “dope” and that’s big for my brother. So, the ones that I’m actually good at playing are Mortal Kombat and Grand Theft Auto because you can button smash in those and that’s one I don’t need to know all the combo’s. It’s better for me. But yeah I like to watch because visually it’s so beautiful.

Q: I bet you would be good at Dance Dance Revolution.

Because I’m a dancer? You know I’ve actually been beat many times in Dance Dance Revolution because again the hand eye coordination or feet eye coordination– because it’s also with the feet too. I can’t skate. I can’t do anything with balance either. So every time I’m looking at the red and looking at the green. It’s like I’m dyslexic. Shit’s going down. It looks like a war zone.

Q: Do you have any embarrassing moments in your life?

I honestly think the whole range from 12 to 15 or 16 was just bad. If I could erase photos from there I would be genuinely very happy. But something that I look back on and I think, “Oh. I wish I wouldn’t have done that.” Well, growing up, I was on Shake it Up from those ages and that was literally being put in the spotlight when you’re so insecure. You’re just growing up and you don’t know what to do. And people are constantly telling you, you should be this and that so you start to believe them and then you find yourself wanting to be liked and wanting to be pretty and really funny and really just trying to be like somebody you’re not. And when I got off this show I did all movies and kind of found myself in the film world that I didn’t have to be that and that people were just going to like me. I was just down. And that’s how I am. And I don’t have to be this kind of character. And I always keep it real. You can just go look at my Tweets. It’s real on there.

Q: You have a new TV show Famous in Love coming up that is about dealing with fame. What do you feel are the advantages and disadvantages of fame?

I guess I don’t really think about it so much. It’s just my life. It is what it is. The disadvantage is that in my hometown of Miami I’m at the beach and there’s like literally 25 paparazzi right next to me as I’m laying down. And the guy is literally right there shooting me and one of the paparazzi was yelling, “Hey. Come on. You got the shot. Leave the girl. She’s just trying to eat a cheeseburger. Let her eat.” “Okay guys.” “But you know when you go in the water, we’ll be back.” I’m like, “Okay.” But a good advantage of it is that as a human being your natural instinct is to want to help people in any way that you can. Why wouldn’t you? It doesn’t make sense not to. And luckily I can use my platform to do some good and talk to teens about all kinds of different stuff and work with so many charities. And just get people involved and do better. Even at the end of the day if you’re not giving money to a charity because you can’t, if you’re talking to somebody, counseling somebody, and hearing what they have to say then that is helping. There’s small things to do. So, I think that’s the good.