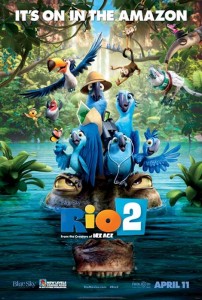 Carlos Saldanha (Ice Age, Ice Age 2: The Meltdown, Ice Age: Dawn of the Dinosaurs) was not just enthusiastic, but outright passionate while presenting clips of his latest project. Continuing the story from the animated family musical adventure Rio, the Brazilian-born director promises Rio 2 to be even bigger and better. 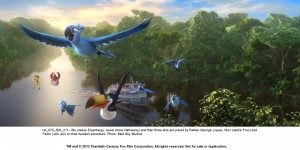 Saldanha admits this project is “close to my heart,” and wanted to continue the story, because he felt there is still more to be told from these characters. The film returns its all-star filled cast and adds more names into the mix with Andy Garcia, Rita Moreno, Bruno Mars, and Kristin Chenoweth for the sequel.

In a story that started in Minnesota, traveled to Rio, and is now continuing into the wild Amazon, Blu (Jesse Eisenberg) and Jewel (Anne Hathaway) have started a family. When they hear news that there may be other Blue Spix’s Macaws in the Amazon, the family enters the jungle to find more of their kind. The theatrical and egomaniacal Nigel (Jemaine Clement) is back, a little battered for the wear, but driven on revenge towards Blu and his family. That family grows a bit when father-in-law Eduardo (Andy Garcia) is introduced, and family dynamics become another challenge for Blu. 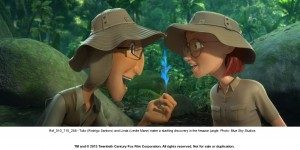 If there is one thing to expect from the sequel it is music and lots of it. Bruno Mars’ voice isn’t wasted playing a smooth singing Macaw. Janelle Monae has an opening number celebrating Carnival with people and animals both shaking their tail feathers. “Music is important, because it’s important in Rio,” Saldanha says, and so the sequel looks to have lots of it. 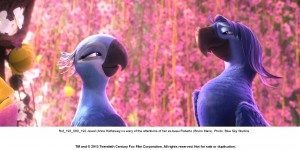 The plant life, shades of green in the Amazon, and various numbers of animals might make this the most vibrant and colorful animated film ever. Rio 2 appears to be a laugh-out-loud fun time, with plenty of song and dance, to make this family musical something to look forward to. By all impressions, Saldanha is keeping that promise of having a bigger and better sequel.