Scarlett Johansson on AVENGERS 2: “I don’t think you’re allowed to ride a motorcycle when you’re so pregnant” 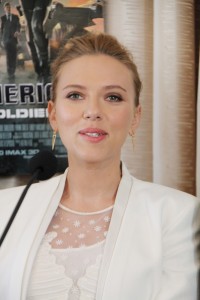 AVENGERS 2: AGE OF ULTRON is jam-packed with heroes and heroines, but Scarlett Johansson stands out once again as Black Widow. Johansson was pregnant while shooting the over-the-top action film, so the question must be asked: How does a mother-to-be defend the world from super-villains? In this WhatsUpHollywood.com interview, she confesses that she did her own motorcycle stunts (sort of), and talks about Black Widow’s sensitive screen moment, a scene that allows the audience to take a much-needed breather from the relentless action assault. And what does Johansson think is next for Black Widow? 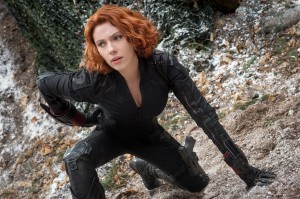 What was it like riding a motorcycle and doing those cool moves?

I don’t think you’re allowed to ride a motorcycle when you’re so pregnant, but I did. I did all the motorcycle stuff. I embarrassingly rode a kind of electronic bull motorcycle which goes nowhere and it doesn’t look cool at all. But we had some very professional and amazing motocross work being done that makes Black Widow look like a total badass. I’m very fortunate that there’s a team around me that’s very supportive in helping all of Widow’s fight moves and badass motorcycle riding happen. I could not do that without that part of it. Starting a move and finishing a move and all that work being seamless takes a lot of choreography and team spirit. Every film is exciting because I get new tools and new fun stuff to do and luckily Joss writes me some badass moves that makes me look epic and it’s awesome. I just said epic, badass and awesome all in one sentence. 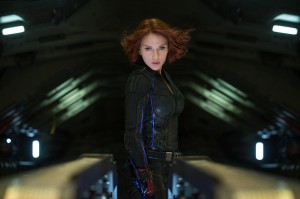 In this film, we learn some of Black Widow’s past, and she shows her female side. Where do you think she is going from here?

Oh my goodness, I think that at the beginning of AVENGERS 2, there’s some sense, finally, of their becoming some kind of normal in a way. There’s a well oiled machine where the introductions are over and we’re at work and digging our heels in and at the end of AVENGERS 2, I think Widow has let her guard down and is hopeful for something and had this moment of false hope where she thought she put in the work and there should be some personal payoff and she was ready to accept it but realizes her calling is a greater one – and that’s not something that she’s necessarily thrilled about – but that’s what’s most heroic about her: that she’s accepting the call of duty at her personal loss. I think that’s an interesting place to leave her because there’s many different directions to go. Is she going to be able to withstand this huge weight that’s bearing down on her or is she gonna crack under it and crumble not being able to take this huge personal hit that she does. I guess we’ll have to wait and see, right?

AVENGERS 2: AGE OF ULTRON opens May 1.