“Snowden” star Shailene Woodley talks about her journey and what it was like playing the girlfriend of an accused American traitor. 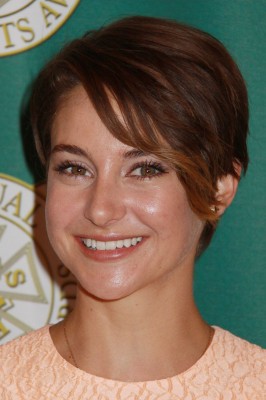 Whenever I get the opportunity to speak with Shailene Woodley, I come away with the same impression; she is a very grounded and well spoken young lady. That being said, it made perfect sense to me, that she would be cast as Lindsay Mills, the girlfriend of Edward Snowden,  in the upcoming film, Snowden.

What I was surprised to learn was that this was Woodley’s first time to be cast as a girlfriend or love intgestest outside of the puppy love relationship she had in The Descendants. I was equally surprised and impressed how much content she had to get into a limited amount of scenes. 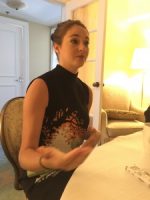 Q: When did you first hear about Edward Snowden and what was your reaction?

I heard about Edward Snowden’s name when the story broke. I remember growing up and I’m not a technological person and the first time I got an iPhone, I think I was 18 and being like, “Oh I bet they’re going to record this” or, “I bet people can see through this camera.” You sort of joke about it. I’m sure all of you have had those moments as well, with Big Brother watching and you make fun of it. When Ed released the information that he disclosed, it hit me with a certain gravitas of, this is real. This is real life. This is not just a suspicion or a hypothesis any more. This is validated. When I heard that Oliver Stone was making this movie, I actually wrote him a letter. I did ask to audition in it, but the point of the letter wasn’t to be a part of the movie, even. It was to say, “Thank you for making a movie like this.” What we can do in Hollywood is, the power of story telling is you’re displaying information, whether it’s true or false through visual, through auditory, so it doesn’t matter what kind of a learner you are or what kind of an absorber you are. You’re absorbing information and you hit all different sensory abilities to learn. So for someone to take a story like the Edward Snowden story where, when you go on the street, half the people know who he is, half the people have never heard his name before. Half the people have very strong opinions that he’s a traitor. The other people think he’s a hero. Everyone has all these very strong opinions about a man that we actually know nothing about. The thing that I fell in love with about the script is that for me, as someone who did a lot of research on the information that was disclosed, I didn’t know that Ed Snowden was a conservative before he was more liberal. I didn’t know that he wanted to be part of the military before he had any interest in joining the NSA or CIA. That wasn’t on his radar. It was sort of a Plan B. We are quick to judge in our society, but so often we are only being fed one narrative, and with Ed Snowden we’ve only been fed the narrative of mainstream media and independent journalists. We’ve never had the luxury of being fed the narrative of the historical events that led him to do what he did. That’s what this movie did, and just leading back to the first time I heard his name and the effect it had on me to now, my judgments even of whatever I may have thought or believed have shifted a little bit because I understand the backstory and so there’s a certain sense of empathy that I didn’t have before. 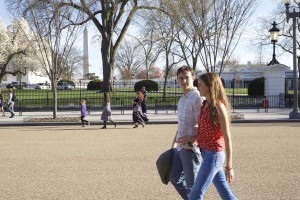 Q: Were you surprised that so much of Lindsay Mills’ point of view incorporated into the script?

It was nice. It was difficult, actually. It was the first time I’ve ever played the girlfriend in a movie, particularly when there’s only eight or nine or 10 or I don’t even know how many scenes. You have to continue progressing the story and move the plot along, while also developing character and staying strong in that character and you’re jumping through different time lapses, so different years and different ages. It was difficult for all of us, for me, Joe (Joseph Gordon-Levitt, played Edward Snowden) and Oliver (Stone, director and co-writer) to use those scenes to make sure they were grounded and truthful and authentic, yet also display all the different variables that needed to be displayed. It was an interesting experience, but it was fun. It was a good challenge. 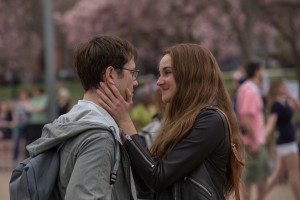 Q: Did you have an opportunity to meet the real Lindsay Mills?

I did meet Lindsay. I met her three months into filming though, so I didn’t meet her before we commenced production.

Q: How did your portrayal or your perception of her change after you met her, if at all?

A lot. Before we started filming, Oliver and I really only had a two-dimensional screen to base this character off of, meaning her old Twitter posts from before Edward Snowden had released all the information, and used to have a blog, she had her old Instagram posts, and she’s a self portrait photographer so there was some photography that we could base her personality off of. Even then it’s hard to shape someone based on social media, because as we all know, you can post anything on social media and that’s not a direct reflection of who you are. After I met her, I remember thinking, “Oh damn, I wish I had met her sooner”, because there’s small physical mannerisms that I would have liked to incorporate, but at the same time, I actually think it’s kind of nice that there is a separation between the character in the film and who she is in real life, because then that protects her integrity and her sanity. 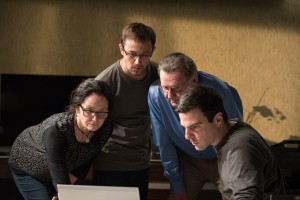 Q: I understand you were on location in Hawaii for some of the scenes,  were you in the same area where you filmed your first big film, The Descendants?

No, we were shooting in different areas but we shot Descendants all over the islands, so there was I guess a few highways that were intersecting.

Q: What is your favorite thing about Hawaii?

Q: Do you have a desire  to direct one day?

Q: Do you have a script ready or am I jumping the gun and your future in directing is farther out?

Directing is definitely something that I would like to do in the very near future.