“Star Wars: The Rise of Skywalker” Director, J.J. Abrams give fans a story of hope and one more ride with Carrie Fisher’s Princess Leia 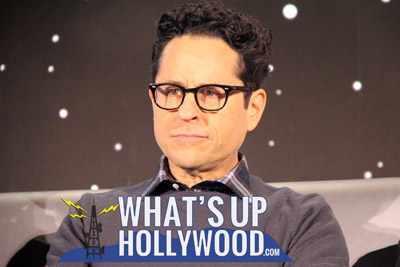 The Star Wars phenomenon has been a part of our culture since creator George Lucas launched the original film in 1977. Forty-three years and multiple generations later, every fan has a different memory of the mega million dollar franchise, but one thing remains the same; their dedication and loyalty to being fans.

With The Force Awakens, J.J. Abrams started the new trilogy with fascinating new characters. After taking over the baton from Rian Johnson whose The Last Jedi split the fan base. He had to conclude not only the trilogy, but nine films.  This was a huge responsibility considering the deep loyalty and love fans have for Star Wars. 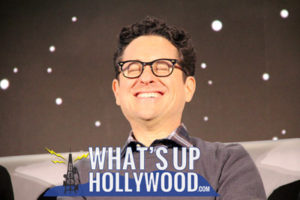 I think the difference is that the pressure has shifted. We didn’t know at the beginning of The Force Awakens exactly what it would look like to have Daisy Ridley and Adam Driver and Oscar Isaac and John Boyega. What would that cast be like? We had to figure it out and discover it. First day of The Rise of Skywalker, we sort of knew some of those things. We knew those things were working. What we didn’t know was everything else. And this was wrapping up not one film, not three films, but nine. And so, the responsibility was significant and the movie, this is a pretty big picture. The scale of the movie is pretty enormous. And we knew that none of that would matter and none of it would work if you didn’t care deeply and track with the people. So, the most important thing, the people, we were good with. We knew we had this incredible cast who I think have gone above and beyond anyone’s expectations and are truly spectacular in the film.

Q: So, at the moment that you accept the invitation to do it, what was your personal process to get there?

Because we had worked on The Force Awakens, Larry Kasdan (Lawrence Kasdan) and I and Michelle (Michelle Rejwan, producer) and Kathy (Kathleen Kennedy), producers, we had talked about quite a few things back in the day. So, it was a bit of sort of picking up where we had left off. And the fact is that what Rian Johnson had done in Last Jedi had set up some things that were sort of wonderful for the story, one of the things being that the cast was separated. The characters weren’t together for the entire movie essentially. So, this was the first time that the group got to be together. Chris (Chris Terrio, screenwriter) and I got together, we knew immediately we wanted to tell a story of a group adventure. There were some very specific things that we were both drawn to immediately and we just started doing the thing that you do, which is you say, what do you desperately want to see? What feels right? And then my job as the director was to make sure that all the pressures of all the obvious things, fan expectations and studio and all those practical, logistical issues as well, weren’t brought to set, that on the set, we could have a sort of buoyancy and a sense of sort of being spry. And while it was never quite an indie on the set of this movie, we needed to keep the thing feeling as human as possible and not like a massive machine, which is part of it in the background, but nothing that creatively mattered to us. 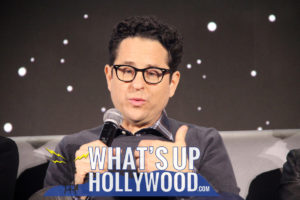 Q: Do you have anything to say about working with Keri Russell whose character is wearing the mask?

Keri loved the mask so much that the first two days she worked as Zorii, the entire two days, I never saw her face. She could have, like most people, taken the mask off in between takes or after a couple hours or after the whole day. But she walked onto set in character with the mask on – not even in character, with the mask on. And she was like, “Hey.” I’m like, “Hey, you want to take that off?” She’s like, “Nope.” And she had it on the entire time. And then the next day the same thing. And I got to work with Keri for a couple days and never saw her. Very strange.

Keri Russell jumped in:  And you would be talking to me and say, “Can you take that off? It’s freaking me out.”

J.J. Abrams:  It is weird, because you’re just looking at, you can’t, you don’t know.

Q:  So, in this final piece, what does this mean and what do you want to say with it?

I like to think that when you’re working on something, especially something, and I say something like this as if these kinds of things come along all the time, and they never do, and I’m still grateful to that call from Kathy (Kathleen Kennedy, producer). The truth is that there’s the movie that you know you’re presenting to the world, and then there’s the thing that you’re doing not necessarily secretly, but meaningfully. We live in a crazy world. We live in a crazy time. And Star Wars for me was about hope. And it was about community, it was about the underdog, and it was about bringing people together. And seeing all odd balls represented in the most unlikely friends and the most unlikely places and the family that you make is really your family. 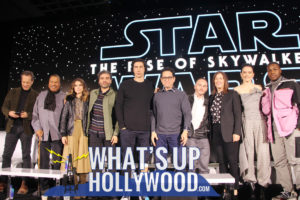 Q: Can you tell us about the process of integrating Carrie Fisher (played Leia Organa) into the film and how you worked her into the story, the footage that you had found from The Force Awakens and what that process was like, even emotionally for you and everyone involved?

Yes. Like everyone here who knew her, loved Carrie. And I knew her for a long time. Not very well, but I knew her for a while before The Force Awakens. And obviously, as we’ve discussed, the idea of continuing this story without Leia was an impossibility. And there was no way we were going to do a digital Leia. There was no way we would of course ever recast it. But we couldn’t do it without her. And when we went back to look at the scenes that we hadn’t used in The Force Awakens, what we realized is we had an opportunity. And we could use that footage, use the lines that she was saying, use literally the lighting [the room’s lights dimmed], that was amazing. Okay. Watch this. The lighting. That was creepy. Hi Carrie. Hi Carrie [saying to air]. That’s so Carrie, by the way, to do that. Really weird. In any event, we knew that we had an opportunity to use the footage to create scenes that Leia would be in. And of course, had Carrie been around, and it’s still impossible for me to believe that she isn’t, because we’ve been editing with her for about a year and she’s been very much alive with us in every scene. And it ended up being, if we had Carrie around, would we have done some different things here and there? Of course, we would have. But we had an opportunity to have Carrie in the movie and working with all the actors including Billie Lourd (played Liutenant Connix) , her daughter, who is in scenes with her. We were able to I think do something that Carrie herself, I’d like to think, would be happy with. She’s great in the movie of course. And it’s still emotional and moving to think of her and how sad we all are that she’s not sitting here with us today.