The Struggle is Real- “Star Wars: The Rise of Skywalker” star Daisy Ridley shares the challenges of becoming a Jedi 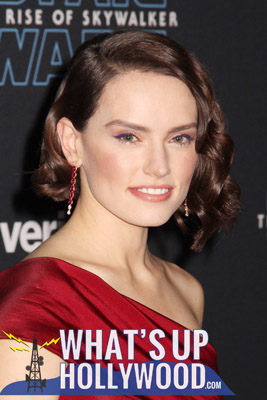 Star Wars: The Force Awakens introduced Rey, a scavenger surviving on her own on the distant planet, Jakku. As she was drawn into the galactic war, she set off on her journey to become a Jedi. Later, as portrayed in The Last Jedi, Rey went through various Jedi training exercises and finally, her self-reflective journey concluded in The Rise of Skywalker.

We wanted to know what went on behind-the-scenes of the galaxy in creating this Boss Girl. Daisy shares details about her most physical and emotional shooting days from both The Last Jedi and The Rise of Skywalker.

Q: What was the scene or scenes that demanded the most from you as an actress? And what did you find more challenging, the rigorous physicality or the depth of some of the scenes emotionally?

It’s a good question, because with the physical stuff, you train and train and train and then the adrenaline helps you like on the day to like do the thing. But obviously, the stamina needs to be there for you to continue to do the thing. But I would say I was more tired emotionally because there really wasn’t a day where I was like, “No, it’s just a quick scene.” Coming from the last one which was quite heavy, even the joyous scenes I found very strange to do. And then obviously there’s a lot of other stuff that’s going on. And it’s also tricky because understanding what J.J. (J.J. Abrams, director, writer, producer) was asking of me, I’d be like “I know what you’re asking. I just can’t quite get there yet.” So that was probably the most tricky thing and sustaining that emotion. And there’s more of, I would say, like a singular intention that was tiring. Because as well, even in the emotional scenes, there’s like a physical containment that is tiring. So really, I’ve not answered the question. And both things were hard.

Q: What was it about the joyous scenes as you called them,  that created a challange for you?

It’s just so strange, because I’ve gone from a film with a lot of being like, “Please be my friend, Luke (played by Mark Hamill).” And he’s like, “Go away.” And I’m like, “No, please.” And then very emotional stuff with Adam (Adam Driver, played Kylo Ren). So, coming back was so great, but it would be so like easy to just flow into it, then you’re like, “Am I acting? Is this what is required?” Because I’m basically bouncing off of Oscar (Oscar Issac, played Poe Dameron) and John (John Boyega, played Finn) and Joonas (Joonas Suotamo, played Chewbacca) and Anthony (Anthony Daniels, played C-3PO) in such a joyous way that you just feel like you’re having a chat with your pals. So, it’s not like difficult in like a ugh way, but it’s strange wondering how that general vibe is going to translate into a scene.

Q: How would J.J. Abrams (director, writer, producer) let you know that it was working or not working?

I could tell when it wasn’t working, because I’d look over and J.J. (J.J. Abrams, director, writer, producer) would be like…[made facial expression] And then there would be some seconds and I’d be like, “Go on.” And he’d come over and tell me what wasn’t working. And I think I felt when it was working, because you sort of, you know, you’re just like feeling the thing. So that’s the look when it’s not working, when you’re like, “Oh God.” 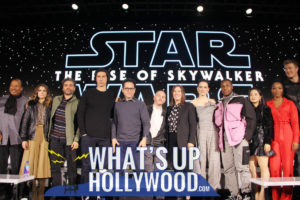 Q: Being a part of the Star Wars universe offers great opportunity for change and to be a force for good. What do you want your legacy to be in the Star Wars community?

Daisy Ridley: Oh my God. That is deep. I think, in itself, to be part of something, like a lot of people in cinema are talking about representation and change and aren’t doing it. So, I think in itself, being part of a team of people that look a little different, that are from different places like in whatever form in that is, gender, race, whatever it is, I think that in itself is a legacy to be proud of. Yeah. And like J.J. (J.J. Abrams) was saying, this is a film of hope. And I think we are reflective of the world at large. There are a lot of people up against magnificent forces that are fighting the good fight. And the characters aren’t real, but what they’re doing is perilous in cinema. So, to be able to portray even a tiny part of that in this crazy world is very special.