Sylvester Stallone embodies a new type of tough guy in “Guardians of the Galaxy Vol. 2”-Cos players, you have been warned. 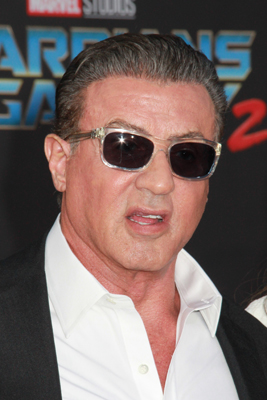 Rocky, Rambo, Demolition Man the list goes on and on of the tough guys Sylvester Stallone has embodied on scene over the years.  So, what’s left for Sly on his bucket list of ways to define bad ass?  One more…the Marvel Comic character, Stakar Ogord from Guardians of the Galaxy Vol. 2.

Q: What made you to join the Marvel universe?

Early in my career, I became fascinated with mythology and Joseph Campbell (writer) and The Hero with a Thousand Faces (book by Joseph Campbell) and so on and so forth. When I started doing Rambo, There is an evolution that takes place and each generation has to define itself, define its own heroes, define its own mythology. This is the new, this is this generation. So maybe even the next generation is mythology. When Kevin (Kevin Feige, Marvel Studios President) invited me on board, this is interesting because I haven’t gone here. I’m kind of earthbound, I’m terrestrial. This is something that takes places in a whole other atmosphere where James (James Gunn, Director & Writer) and the Marvel people have created their own world, their own reality. So I said yeah, let me visit. Let me drop in here and see what’s up, where the future is going. It was great. And it got me out of the house from my three daughters [laughs]. Thank you. That’s why I gave you my salary back. My pleasure.

Q: How familiar are you with comic books and had you read Guardians of The Galaxy comic books before you joined the cast?

No I didn’t because I grew up on a different sort of super heroes. Like elastic man. They are really horrible but to me it was wonderful. So for this one I wanted to go in with a clean slate, just do what the director wanted done. So now I am starting to catch up on it. I think there is going to be a naïve allows you to be directed and the direction they want you to go without any preconceived ideas.

Q: How do you feel when you go to a science fiction convention and you see people dressed up as your characters?

Q: Have you checked off all of the boxes as an actor? Is there something else out there that you would like to do?

The only thing I haven’t done is to perform brain surgery on myself. I have been very, very lucky. I spared Shakespeare undo stress by not doing that. I don’t think it works (for me), you got to know your strengths and weaknesses. This has definitely ventured into a new area. It takes a lot of skill to work in these films. It’s one thing to do the kind of action films that I do. There is a lot to it, I was very impressed by the patience and the professionalism and the overall skill set that these people possess. I’m jealous.

Guardians of the Galaxy Vol. 2 opens theaters on May 5th.  For more information visit the film’s official website at, https://marvel.com/guardians