“How to be a Latin Lover” star, Rob Lowe on health, Hollywood, and that damn Kevin Bacon. 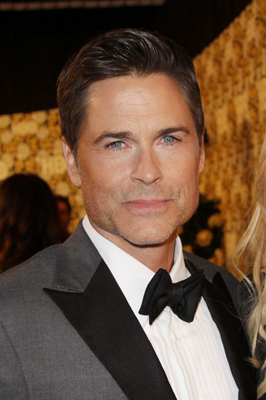 If there us an acronym for hot dad, let’s just go ahead and tag that to Rob Lowe. The actor who first got our attention back in the eighties as Soda Pop Curtis in the coming-of-age film, The Outsiders is not only smoldering with hotness thirty plus years later, but he looks really happy and content. With pages of credits to his name, kids and a marriage that has well surpassed the typical Hollywood expiration date, he now co-stars in the hilarious new comedy, How to be a Latin Lover. We chat with Lowe on what is his secretes are to longevity in health and Hollywood.

Q: That is impressive because you look thirty-three.

Q: What is your secret?

That’s sweet, thank you. Well, I would be remiss if I didn’t say that I do have a regimen. It’s my own skin care line that I use that I developed for myself and for my friends. It’s called Profile. There’s the maintenance part, right, which is a very specific thing. Guys, they’ve got to do certain basics or they can’t expect to hold on to what they’ve got. I do that.

The other thing is more global. I get asked this a lot, as you can imagine. It’s really an inside game. We’ve all seen kids just out of college and they just seem beaten up. They seem old before their time. We’ve all seen 90-year-olds who you can’t even imagine that they’re anywhere near that, so what that tells you is that it’s an inside, spiritual point of view game.

I just hosted Elton John’s seventieth birthday this week. I’ve known Elton for a long, long time. Forget all you know, what’s amazing about him, is you sit with him, he knows everything about everything. There’s no detail too small, no pop culture person, no news item, no event. He, in the middle of his seventieth birthday, gave me a condolence on the loss of one of my friends that had happened two weeks before. To me, what that is, is participating in life down to its smallest detail, even at that stage. He could be on some throne, where I have other famous friends who don’t know who anybody is. I’m like, “Really? What fucking world are you living in?” That’s not a good way to be. 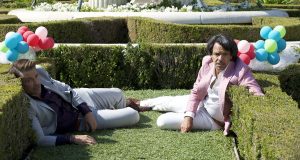 Q: This film is full of funny moments. Was there any room for improv?

Yeah, we improved a lot. Another reason why I knew I wanted to do the movie is I didn’t know a lot about Eugenio (Derbez, played Maximo), other than how vast his reach is with his Latin fans, but I knew Ken  (Marino, director) came from the world of improv and would be comfortable with it. And indeed, when we got in the scenes with the Robs, Corddry (played Quincy) and Riggle, both of whom I know and adore, all of it was … I mean, we ad libbed, “I will shoot you in the Lorax.” They’re like, “Uh, that’s not a body part. It’s a children’s book.” That’s all ad lib. When I pull the arms off of Raquel (Welch, played Celeste) and I present her arm to her like it’s a sword from fucking Game of Thrones, that’s an ad lib. But the thing is, you never know if that’s going to get used. Game of Thrones is so in your face that I was like, “I’m going to do a ‘Game of Thrones’ thing because everybody is so obsessed with it.” So you just never know what they’re going to use.

Q: You started in this business when you were in your teens.  I remember when you were considering Hollywood royalty as a leading member of the Brat Pack. Do you feel more comfortable now in your skin than you did then? What would you say has changed about you over the years?

Oh, that’s easy. The answer is yes, yes, yes and yes. For me it was being in recovery. Getting sober. I mean that was the game changer for me. It will be 28, is that possible? It will be 28 years May 10th. I just grew up and learned to the extent anybody can learn how to handle this insane business, because all of our flaws are also our strengths. All the things that make us great are also the things that make us not great. It’s a really complicated mix, being an artist and I don’t like using that term because it sounds so highfalutin. But we really are craftsmen and women. We build things. That’s what we do. We have a toolbox and it’s different for different movies. What’s the key going to be? Sometimes it’s the hammer, sometimes it’s the lathe, sometimes it’s the paint. You don’t know. But that’s what we do. We build things.

Sometimes I go, “Why am I so tired?” and I realize because I manufacture things out of my mind. I’m doing a show with my son. It’s an adventure show for A&E, eight episodes, called The RL Files. I invented it out of my mind. I mean, one day I had a thought, and then a few weeks later there are a hundred people around and money’s being spent, and we’re making something that will be around forever. That’s the most satisfying thing that I can imagine, is being able to conjure. Literally it’s conjuring. It’s z-roop! It’s a gift and it’s a blessing.

Q: What is the craziest thing you’ve ever done for a part?

Oh, I showed up drunk to the St. Elmo’s Fire meeting with Joel Schumacher, with a six pack, because he didn’t think I was edgy enough. I got the part.

I shaved my legs, wore a dress and had amazing makeup and a red-headed wig. I looked like Jane Fonda in The China Syndrome for a movie I wanted to do that ended up being horrible. I did not get the part, called To Wong Fu, Thanks for Nothing Julie Newmar. I’m surprised it didn’t do so well with an amazing title like that. I lost that part to Patrick Swayze, but that definitely would be up there.

The list is long. I blew my knee out in the Footloose dance auditions. Didn’t get that. But as I was being wheeled out on a stretcher from Paramount Studios, and I think I was the leading candidate for the part at that time or so I was told, they were like, “You know what? Don’t worry. We’ve decided we’re going to cast a real dancer.” I was like, “Well, at least there’s that.” Then I wake up to fricking Kevin Bacon? Who’s he? Liars.

Q: Tell us about The RL Files ? Where do you go? What are these adventures?

We, as a family, have always been into spooky campfire stories and ghost stories and we watch Ancient Aliens and Finding Bigfoot and laugh about it and wonder if it’s real or not real. These are all super natural, freaky. We look for Bigfoot, we go to the most haunted location in the United States. We spend the night there. It’s legitimately like, “Hey, if you could be in Scooby Doo for real, would you do it? The answer is, “Uh, yes. Absolutely.”  It’s eight episodes and appears this summer on A&E.

How to be a Latin Lover is currently playing in theatres nationwide. For more info visit the film’s official website at, http://tickets.howtobealatinlover.movie/