“Unforgettable” star, Rosario Dawson continues to make an impression, on and off the screen. 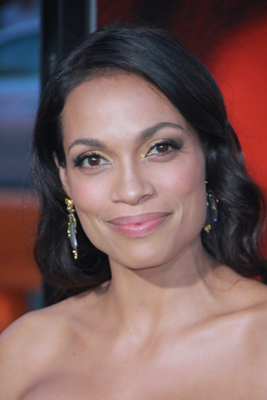 Whenever we get the opportunity to sit down with actress,  Rosario Dawson, I am always impressed with the speed in which she speaks and the depth she gets to. The triple threat talent is once again wowing fans onscreen but never stays too far from her philanthropist efforts and community involvement, which is why Dawson is so unforgettable in her new dramatic thriller. 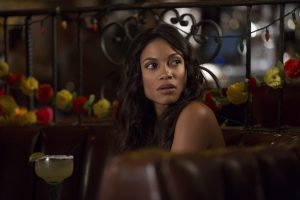 Q: What attracted you to the role of Julia Banks?

What I loved about this was the opportunity to work with a bunch of remarkable women and tell a very multi-faceted story about women that didn’t have to have them be perfect. What was interesting was watching these different women struggle with the idea of perfection. And how each of them, striving in that perfection, how much gets lost in the way. For miscommunication and opportunities and possibilities because you’re so just caught up with the knee-jerk reactions or the heat of the moment, the distraction of anger. I liked that part of every single one of those women. There wasn’t, “Oh, she’s bad!” and this is the good person. I’ve definitely not handled upset well, and I’ve gone a little crazy. I think that’s an interesting thing to explore, actually, to see these different women, the full spectrum of what it is to be passionate. 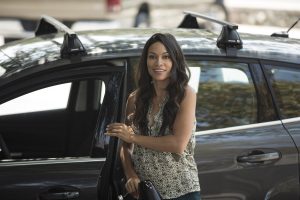 You were seeing as well when we were shooting it. Cheyenne (Ellis), who is Katie’s (Katherine Heigl) stunt woman, she’s been working with her for years. I’ve been working with Aja (Frary, stunt double for Rosario) for years, she’s been on all the Marvel Netflix show’s (“Iron Fist”) with me. And it was like, I’d fight with you, Katie, then Aja would fight with you. Then I’d fight with Cheyenne and then Cheyenne would fight Aja. We’d all take turns tussling with each other.

Q: Did you do any research on domestic violence victims for the role?

Yes, but over the years, I have been a spokesperson for different campaigns. Everything from Purple Purse (a campaign against domestic violence) and on the board of V Day, campaigns for violence against women. My mom when she was younger worked at an organization called Woman Inc., which was my first real experience. The remarkable infrastructure that some people choose to create for people like my character, who ends up really alone. She doesn’t have family, or a lot of friends. And oftentimes when you get into an abusive relationship, they silo you off and cut you off from the herd. You end up being more and more desperately needed that abuser. To know my mom was on the other side of that war for a woman like my character when she’s finally ready to get out of this, that she needs help, there are people, strangers, who are willing to do that, was always so powerful to me. So that was big consideration for me. The reality she sought out psychological help and went through all of that.  That was really critical for the reason why my character is in the position she is, where she can have love in her life. But she did do that work and looked at her pain. She dealt with it. 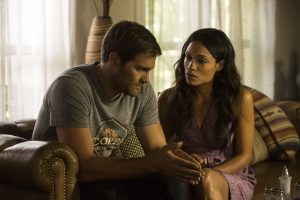 Also, how critical that relationship was with Ali (played by Whitney Cummings) because she’s her boss and who she works with but she’s her best friend. And one of the very few people if only people who actually knows her true journey. That’s really unfortunately the case for a lot of people who are in abusive situations. Why would you handle that? Or why would you stay there? There’s a real why and I think we tried to treat that as respectively and honestly as possible. 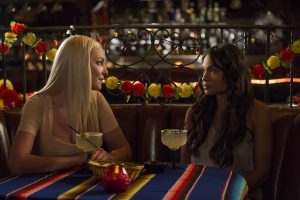 Q: What are your thoughts about the online privacy issue that’s approached

I found it very fascinating and I think this is a whole movie about people trying to have secrets and protecting themselves and not sharing a lot about themselves. Being very thoughtful and pointed about what they do. Because of that and the walls they put up, the opportunities are missed for these people to be able to relate to each other. So they are forced into this situation where they’ve been alone, rather than in person asking. They are by themselves alone, going through stuff. “Let’s look at Tessa’s school records.” Rather than directly asking that person, you’re trying to find that information out, and we use that information against each other. Again, that’s showing that misstep. There’s a serious conversation we have to have around privacy and boundaries and also about honesty and what we are willing to share. Right now we’ve got Congress signing and saying corporations can go a look at our browsing history or anything without our consent. So, Big Brother is doing that on a regular basis and for the greater good, being able to see our spending habits and all of this kind of supposed stuff. There are some definite benefits to augmented reality and things that come from that, but also, what are we giving up? We don’t really know because we haven’t seen this landscape before. So I think the opportunity constantly being missed is being about relate to each other and find commonality and not use this information against each other. We want to have trust and safety. And this definitely shows you the different ways we could have explored it. And the tools we could be using as tools rather than crutches or weapons.

Unforgettable is currently showing in theatres nationwide. For more info on tickets and theatre locations, visit the film’s official website at www.warnerbros.com/unforgettable