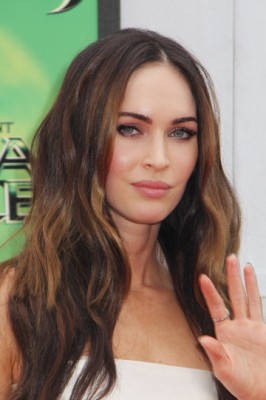 uhIt is very cool that a super beautiful woman speaks like a tomboy! Megan Fox is extremely beautiful (almost unrealistically so) in person as well as on screen, but the things that come out of her mouth are very real. In her new movie Teenage Mutant Ninja Turtles, she plays a journalist who chases Turtles to take photos with her smartphone and report on them. Megan herself is usually chased by paparazzi and reported on by the media. Did her perspective about journalists change after this film? How does she decide what to show the public and what to keep private? Also, she gives her honest opinion about the situation of young actresses in Hollywood. 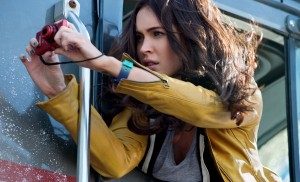 Q: As a reporter in this film, what do you think of the news today and tabloid pressure? Did you change your perspective?

I’m not trying to tell you guys that you’re obsolete but everyone with an iPhone is a journalist in their own way now, especially because we live in a tabloid culture. When you watch CNN, they give you news that is based on tweets that people are sending out. You realize that society’s really changing. The collective public has a voice now that they didn’t previously have. The trajectory of how we are socially with one another, I don’t know, I’m going to get metaphysical with you, but the point is, it didn’t necessarily change my view of you guys so much. I think I realize your job is much more tedious than I realized previously. You’ve got to keep track of a lot of shit.

Q: How do you know how much of yourself publicly to give away and how much to keep?

I clearly haven’t learned that lesson yet. I’m probably the worst person to ask. I like to be open with you guys and I like to be honest. I hate being disingenuous. It’s really uncomfortable for me. I don’t excel in doing that. But I’ve also learned because of what you do, so much of what I say is sensationalized. You have to report on scandal because that’s what people are hungry to read about. Even when I’m trying to be straightforward and honest, and my comments are innocent, inevitably they’re turned into something sort of salacious. So I don’t have a good gauge on how to edit, but my intention towards you is a good one, so you guys should behave yourselves and be nice and report what I say.

Q: Were you attracted to the role because April’s a strong female who didn’t have to show her body, which you did all the time when you did Transformers?

First of all, I don’t mind doing that stuff. I think that’s been a part of being an actress in Hollywood since the beginning. I don’t feel ashamed or like I can’t be taken seriously while also wearing a tank top. And if you don’t take me seriously when I’m wearing a tank top, that’s your f****** problem, not mine. But I was attracted to this because I was a fan as a kid, and I really wanted to do this. I got the opportunity to go in and have a meeting with them. I went in and it was Valentine’s Day. I was there, we were in there the three of us, for five hours at Paramount with my first meeting. Brian (Austin Green, my husband) was texting me, “It’s Valentine’s Day. Where are you?” Then I got home and sent everyone an email saying, “It’s okay if you don’t cast me, I understand. I just want you to know that I’m going to be in the audience regardless.” I really campaigned to get this because I was a fan. I was afraid at the same time because you don’t want to ruin something that you loved, and be a part of its downfall, so of course I was terrified of letting people down. But I had to do it because it was iconic to me as a kid and I just feel lucky to have gotten the opportunity.