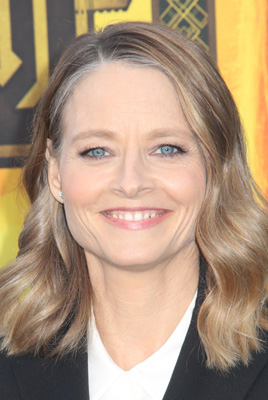 Out of the gate, I have to say what impressed me the most about Hollywood veteran actress, Jodie Foster is how incredibly intelligent and well spoken she is. Over the course of my career I have interviewed many talented people, but it is so rare to receive such concise answers as I received from Foster.

That being said, it was equally impressive with how down to earth she is. This is an actress who started when she was 3 years old, had her first major role at twelve years old opposite Robert DeNiro in Taxi Driver which gained her an Oscar nod for Best Supporting Actress.  Had a handful of other memorable roles, then hit pause, got a degree from Yale, came back to Hollywood for more as well as adding in producing and directing. It’s like hanging out with Einstein while wearing flip flops and sipping on lattes.

Now Foster is back in the actress saddle playing the mother of son, in real life she has two sons. I was told it is pretty hard to raise different gender by gay couple. She revealed what she experienced. I am sure, you will more love Jodie after you read this interview.

Q: This is quite an unglamorous role. Were you concerned at all about it?

Oh my gosh. No, that’s what I wanted. That was the whole plan. I picked it because I felt like it was a physical transformation, which I was really looking forward to just coming back and being not as the people have usually seen me. I had to fight for that a little bit. I think it was definitely some resistance. Definitely. I think it was jarring when they first saw it. They were like, Whoa, wait a minute. But it was right. It’s right. It’s interesting to me how the rawness of what she’s going through and her life and all of that, you really get that from that face in that body and the physicality of the character. 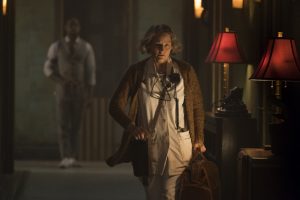 Q:  It seems as though when movies have a theme about the future, the outlook doesn’t look very promising, and they seem to always be set in Los Angeles. Why do you think there is always such an attraction to a grim future for humanity?

Well we see it as grim. It may just be an evolution of where we’re headed. I mean, you look at The Matrix, right? And that was a really prescient movie, The Matrix and people are like, oh my God, right, this is where we’re going to be? People are going to be sleeping in their bodies, but they’re actually going to be these big fit guys who were doing things vicariously. That’s just crazy. But that is where we are now. I mean that is where we are. I look at my kids on a Sunday morning and that’s where they are and it’s okay. It’s just the evolution of our species is the evolution of where we’re headed. And technology has been a really, really fascinating point of departure of evolution for our culture. You’d think how long it took for human beings to lose their hair on their bodies, right? Because man didn’t need it anymore, they got clothes. Well, it took about five seconds for technology and the digital revolution to change everything overnight. It took 500 years…thousands of years for every other evolution. But the digital technology has changed everything overnight, whether it’s the stock market, whether it’s the influence of media on our politics, whether it’s viruses, or algorithms and how algorithms speak to each other. I mean, it’s the best thing for science fiction ever. 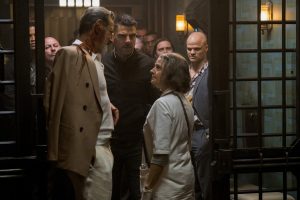 I don’t know. We’ve all been women for a really long time and you’ve had the experience of living in our bodies for a really long time. And when I was a kid making films, there were no other women there ever, there was a makeup artist and occasionally maybe a script supervisor, but I grew up with a bunch of guys and that was wonderful world of filmmaking with a bunch of guys who, that was my film school and that was my family. So, things changed a little by little in terms of technicians, but it didn’t change for directors. It was really in terms of that and in terms of Hollywood and all that kind of stuff. It’s really directors that are the key place now because everything else has a parody. 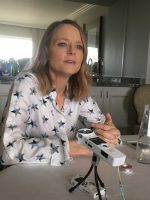 Q: What will it take to get more female directors?

They’re doing interesting things in Europe now with quotas and you hear the workload and you think that’s crazy. The problem is systemic. So, when they say, wait, but there aren’t enough women directors that we can turn to, to direct a one hundred fifty-million-dollar movie. They’re like, that’s because you didn’t hire a woman director to direct a five hundred-thousand-dollar movie and when that movie was successful, that person didn’t get a second movie that brought them to four million dollars. You know what I’m saying? The problem is the system. So that’s why the quota system has been very interesting that they are doing stuff like that in Europe. Seems to be working quite well. 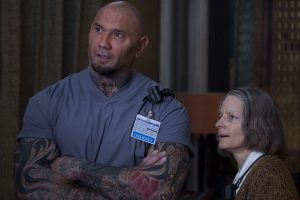 Q: Could you talk about the diversity in this cast?

Because it feels like real life, right. Because it feels like real life in an urban place, whether you’re living in New York or Los Angeles. That’s what it feels like, and it was written that way. It was written to feel like real life and that the casting process was really fun. I was the first person brought aboard and then I got to see how that all went down. So, Dave Bautista (played Everest) came second and then that was something that Drew (Drew Pearce, writer & director) really wanted to fight for that vision of Los Angeles in the future. And look, I have this experience because I’ve played women. I flipped movies for example, where I’ve had a script that was written for a man and then we flip it and turn it to a woman and sometimes this happens, vice versa. And it is interesting how the experience, a female experience changes completely the character, right? So, for Flightplan, which was written for a man and Elysium as well, it’s a whole different set of references the second that you flipped the gender. And I think that’s true. That happens with race as well. We know that not all of black experience is slave movies, right? We need to have black experience shown in everything doctors, players, airplane, flight attendants, etcetera. And when you do flip the race, when you do see the world through that lens, everything becomes richer. So the character of the two brothers, for me that was really important. To Drew, I was like, the two brothers, this idea of these sort of two brothers who one is keeping the other one down because he just can’t stop putting dope in his arm. He just can’t stop being a fuck up. He just has this idea of what being a gangster is and his brother’s just been trying to get out. But he’s never been able to because that struggle I thought was really interesting when you flip races. 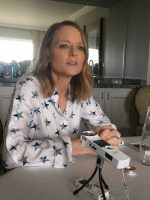 Q: Your character has a son in the movie and in real life you have two sons. Share what your experience of being a working mom and raising men has been like.

It’s just a great experience. I loved having boys, I’ve loved watching them. It’s fascinating to me because it’s different. Their puberty is so different and, I have such a close relationship with them. It has been really great for me in a way to come to really understand men in a way, through them. Like, how did that happen? Why are they like that? Oh, I see. It’s a beautiful bond. I obviously, I’ve played the mother of lots of girls as well. But yeah, the boy thing, is special. Little Man Tate first movie I directed is about a mother and a son as well. There’s something very special about that relationship with a single mom raising a boy. There’s something almost romantic about it because you raised him from the time that he needs help and he has diapers and he can’t cross the street without you and he’s crying in your arms and then suddenly you have a six-foot-tall guy and he’s that same person, and that’s a bond that you just cannot describe to somebody.

Q: Are you a strict mom?

Oh sure. We got lots of that stuff. But now my boys are…My oldest one is twenty. He’s just back from college from his freshman year of college and my little one is sixteen and a half. There’s not much I can do about it.