Sam Claflin earns his sea legs while pulling on your heart strings in is new film, “Adrift”. 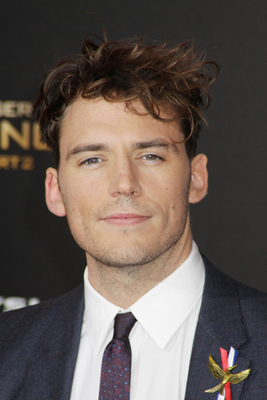 Charming Englishman, Sam Claflin takes on the role of, Richard Sharp in the heart pounding true story, Adrift opposite Shailene Woodley. We hear from Sam what it was like filming for days in the water and his meeting with the real Tami Oldham for the first time. 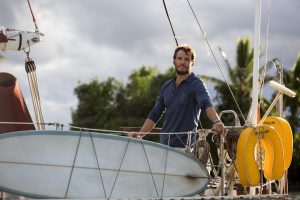 Q: What kind of research did you prepare for your role?

There was a brand-new terminology for living basically. But I think what was great is that, both Shay and I were kind of willing to jump into the deep end, excuse the pun, and we were also really fortunate enough to have a great marine team supporting us and showing us the ropes. Again, excuse the pun. But yeah, I think, when you’re with a crew and a small cast who are willing to kind of get your hands dirty and get physical, I think we were on to something good. 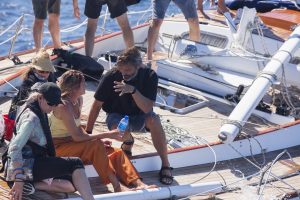 Q: Did you deal with seasickness or while earning your sea legs?

I think that the problem is real sailors make it look really easy. So, I think once we got going, I think the first day I went out on a boat in Fiji, me and Shailene (Shailene Woodley, played Tami Oldham) were taken out on this yacht that you see Tami (Tami Oldham) saying at the very end of the movie, the real Tami. We were sailing just in the harbor and I was sick. So, a part of me was really worried about this film because we spent most of it on the ocean. But what I quickly realized is that not eating much and having lots of coffee is a really bad thing for a sailor. But also, on day one of filming out in the open ocean, we’d shot, we managed to capture quite a lot of the sort of early storm sequence. Like as you sort of see the water’s getting choppy and us tying everything down on the boat. We were surrounded by a lot of crew. There was about a key fifteen to twenty-man crew on that boat. So, it became very claustrophobic at times. But especially when the stench of sick rising up from the whole of the boat kind of crept into your nostrils. It got quite difficult. And it was a very choppy day. I think it was the worst day for swells. And that was our day, our introduction. So we were forced to get our sea legs early in a great way. 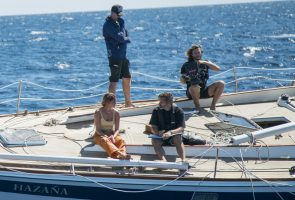 Q: The water looked freezing, but you were wearing a tank top and it didn’t appear you were shivering a lot, how was it?

Some days we spent more, Shailene (Shailene Woodley, played Tami) especially, spent more time in the ocean than out of it. I think if you’re treading water for that length of time and you’re not able to get warm in between, I imagine it to get very, very cold.

I think if you spend hours and hours in it without the opportunity to kind of get out and enjoy the sunshine, I think you’d get cold. We had a stunt team and the marine team kind of supporting the boats were wearing dry suits and you know, all sorts of layers underneath there just to sort of stay warm. But they were staying in the water for those twelve, fourteen-hour days with very minimal breaks. So, it can get cold, but I think generally we were very lucky. 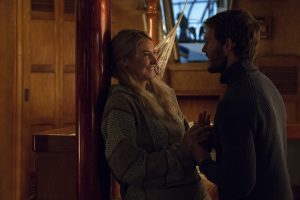 It was difficult because for me, like the one thing that I sort of said of my interpretation of Richard is that I didn’t ever want to kind of mimic what he was. I suppose I try to be true to have viewpoint of him and her have remembrance of him. But at the same time, I needed to bring qualities of me into that role. And I think what really struck me and kind of gave me some comfort, is that when we met her, she’d sort of went to the side. I remember I was telling a story and it was a jokey story and she’d just sort of went silent and then she was like, “I can’t believe you. You are him, you are him, you are. You talk like him.” Without trying, there was obviously I possess qualities of this man. So, there was something quite rewarding about doing that and kind of knowing that you’ve touched a part of that person. So, it’s good.

Q: What would you say you learned about the power of nature while doing this project?

I think what my experience of going through this journey, like one thing I will say about myself is I’m not a sailor and I don’t think I ever will be, but I really fell in love with the water. As long as I could see land. I think there was just, just seeing how drastically different the ocean was on any given day. Like one day it will be choppy as anything. The next day it’d be like glass and you wouldn’t see a wave all day. I mean it was, it was just incredibly eye opening. And I was about to say we have no control over mother nature. In a way we do. Of course, with global warming and everything going on that’s partly to do with us as humanity, but I feel like there are many elements to mother nature that we don’t fully understand and we are a slave to it. And I think I really appreciated. I think that’s partly to do with the location that we were shooting in. Fiji is a beautiful place, so when you’re surrounded by these, beautiful sunsets, the beauty was perfectly captured I think, and I think Bob, (Robert Richardson) the cinematographer, managed to kind of capture those beautiful moments in it and to live through that was amazing. 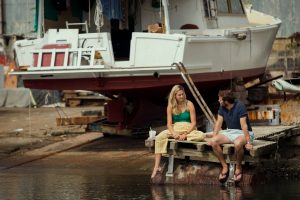 Q: Okay, lets hear the truth, how good are your survival skills?

The North star is wherever my Google maps tells me. I think I’d be okay. I think I’m much more resilient than I once thought I was. I was a cub scout. Like I know how to survive in the woods to an extent. I’ve never been put in that situation. It’s hard to know how you will deal in any given circumstance. Like I’m sure Tami, for example, wouldn’t know that she could survive 41 days at sea on our own before you put it in that circumstance. It’s difficult to know you’re your body can be pushed to until you’re put in that. But I’d like to think that I could do it. I think you’d be fine. I think you’d be 100 percent fine.

Q: Between a few of your different roles, I would say you have mastered dying tragically.

I’ve just got that face that people want to kill. In all honesty, I knew this had come up at least one point because I think there is a recurring theme. I just love the stories that I’ve worked on and I’ve read stories where I don’t die, but for whatever reason I’m drawn to things that have an emotional punch and it’s usually because I die. I get really teary when I die. People are just going to stop watching because. But I think honestly, I do genuinely love the stories that I’ve worked on and that’s whether I with a great interesting three-dimensional character and a new challenge. The dying part is I die differently this time. It was challenging. There is no pattern for me. It’s just the way it happens to be. I’m the new Sean Bean (actor, has played many characters who died), what can I say?