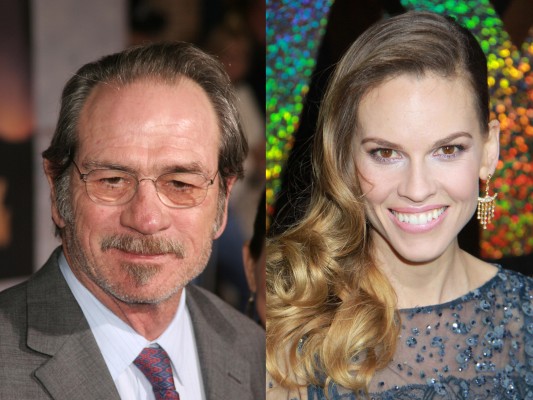 Oscar-winning actor Tommy Lee Jones helmed The Homesman, in which he plays the leading role along with Oscar-winning actress Hilary Swank. They both attended the press conference side by side and talked about their experiences making this film but also made a new deal in front of us while Tommy Lee explained his Japanese TV ads, “Alien Jones.” (You can see his really good comedic skills in these TV commercials!) We also found out about Hilary’s family history. What helped Tommy Lee with the setting of this film? 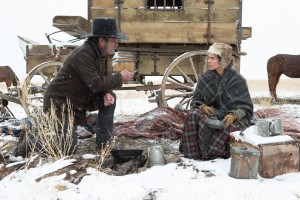 Q: What were your considerations in your visual tone?

Tommy Lee: It is a journey eastward, and the destination looked a lot different than the origins, and I got really tired of trying to figure out how we were going to make Galisteo, New Mexico look like bosky woods, with all of everything and all manner of computer-generated imaging and phony trees — it didn’t work. And we were very lucky to find Lumpkin, Georgia, where some man with a considerable amount of disposable income, discretionary income, tried to buy every 19th century house in Georgia and Alabama. He made a little town. It was perfectly suited to our purposes. We were very, very lucky to find that facility, because of the contrast between Nebraska and Iowa. We wanted the end of the journey to look and feel a lot different than the beginning. Pretty simple. 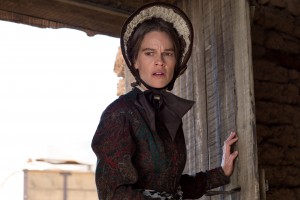 Q: Hilary, how familiar were you about people in that period and place?

Hilary: My aunt, funny enough, who is sitting right behind you, they are from Iowa. I was born in Nebraska. I come from a generation of farmers, too. What was interesting, my dad gave me accounts of our history – to the early 1700s – and there was one account that is so shockingly similar to this story, but I only read it three days ago. My jaw dropped. My dad is here for the premiere and he doesn’t know what the movie is about. I thought, “Wow. [To her dad] I couldn’t wait to tell you that.” One of the things was Indians shot one of my ancestors, John Swank, 19 times, but he was against a rock. So, they fled because they thought he was a spirit and he didn’t fall over. 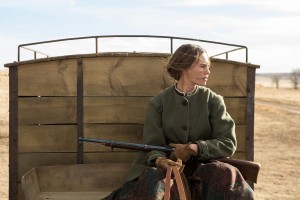 Hilary: I would say the things that Mary Bee was working through are not dissimilar to the things that we all work through in our lives. We all struggle to find how to be the best people we can be and try to find love along the way. That’s why for me it’s not just a period piece. It parallels everyday life for a lot of people. I relish the opportunity that I get to play these real slices of life because even though it’s not based on a true story, in a lot of ways — as I was talking about with my account of my family’s history — it’s real life. It’s real life stuff. And getting to do it alongside someone as esteemed as Tommy Lee, who’s been doing it for so long, is such an honor as an artist. And to me, Mary Bee is a woman who has manners and morals and values. She wants to do the right thing just for the sake of doing the right thing, and in my opinion, we’ve really lost touch with that as a society today. So there’s so many reasons why I love her, and then there’s so many reasons why I relate to her, as an independent woman myself, as a woman who, for all intents and purposes, people would probably call bossy. I have a real clear idea of how I see the world and how I want to live [in] the world. I want to see my dreams realized; I want to continue down my path. And so finding a man to walk shoulder to shoulder with me, it can be challenging. I think women today have that challenge. So [there are] a lot of reasons why I love her and the vulnerability of her, and her strength. 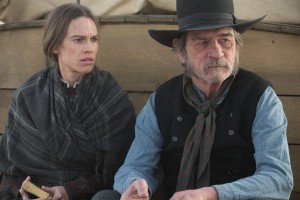 Q: Tommy Lee, in Japan you are so famous as “Alien Jones” in the TV commercials, and you’re really funny in them. So most Japanese people think you are a comedy actor. But most of your film characters are grumpy-ish with a good heart. Which type of character is easier for you to play?

Tommy Lee: I really love doing those commercials in Japan. I’m leaving in three weeks to make some new ones and it’s the most successful advertising campaign in the history of Japanese advertising.

Tommy Lee: Yeah, it did well and people love it…

Hilary: I think she wanted to know, is it easier to be funny in those or be serous in your movies?

Q: Yeah, which one is easier? Hilary is my translator… [laughs]

Tommy Lee: I love being an actor. I’m always happy to have a job.

Hilary: I think what’s great is that he can do both and that it defies stereotypes, because certainly when people talk to me about Tommy Lee, they say, “He’s so serious and intense.” But maybe that is what he wants to portray at that moment. You don’t have to show off all assets of yourself at one time and that’s the great thing about being an actor. We get to share all different sides of us that we have in us. I don’t think that everyone can show all of those sides. So that speaks for his talent to be able to do all different types of genres and do it so well. My question was what? I remember his but I don’t remember mine. Oh, I guess I answered it.

Tommy Lee: Hilary, I want you to go with me for the rest of this deal.

Tommy Lee: Only you could both ask and then answer the question. So I am sticking with you.