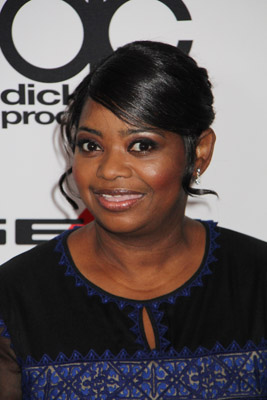 What I really like about Octavia Spencer is she is very down-to-earth. Someone you would hang out with or share funny videos on Facebook with, yet she oozes the artistic authenticity of a legendary actress. Her characters come across as very purposefully articulated and trust me, that is no accident. Meanwhile, when Octavia the person enters a room, she projects a warm vibe that draws you in. If I had to imagine the female version of Morgan Freeman, it would be Octavia Spencer.  So, it makes perfect sense to me she landed the role of Papa in The Shack.

We chat with Octavia on her nominations, how she selects projects, and if her baking skills in this film are as memorable as they were in The Help.

Q: Are you drawn to roles that have spiritual elements?

This is actually the first one. I’m drawn to material. It has to resonate with me on some level.

Q: Did you read the book or the script first?

I read the book independently of any movie talk. I read the book a few years ago, so I am one of the legions of fans. When I heard that Gil (Netter, producer) and Lani (Netter, co-producer) approached me about it, and I went there to convince Gil why I needed to be Papa (Octavia’s character).

Q: What was it about the role that appealed to you?

It’s not the role; it’s the material as a whole. I love the message of the book. I love the fact that Paul (author, William P. Young) wrote this book where a regular man has a conversation with God and he asks him some very hard-hitting questions, and God answered him. I thought it was a very unique way to look at religion and for regular people, to look at their role in how they basically influence their environment. 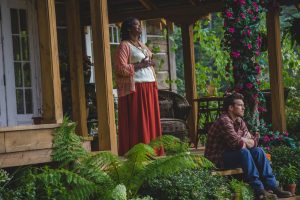 Q: How did this book affect/change your life?

I don’t like to go into specifics, but reading a book, I learned something different, then after playing the role I learned something very different. For me, when you have to prepare to play god, and walking away from that, you realize just how tough god’s job is. I don’t want that job. 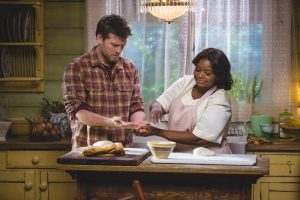 Q: In this movie and The Help, you were a pie baker. At the press junket of The Help back in 2011 , you teased that don’t do cooking. Would you say your baking skills at least improved after these two films?

I am not a cook at all. It’s not something anyone who knows me has ever asked me to do. When you have a dinner party, I’m the person who’s going to help you clear your table and do your dishes. I’m not a person that you’re going to want to ask to help cook anything. I do like to watch, I like to watch people cook but not to the point where I would serve anything I cook to people. 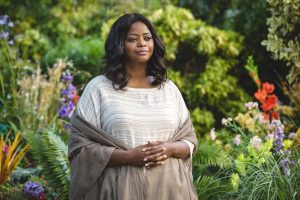 Q: So you received an Academy Award nomination again. We didn’t get a chance to cover the junket so I’d like to ask you about that experience (in Hidden Figures.) You joined that really amazing story. You did a great job again, and received a nomination. This year’s Oscars are different from previous years. So how’s your mindset now?

Listen, to be recognized by the Golden Globes and SAG (Screen Actors Guild) and now the Academy for this role is humbling. Again, I’m playing a woman who, in her lifetime, made these contributions to science, technology, engineering and math and NASA, and went unheralded for it. So, for me, it’s coming full circle for her and her family. And I’m appreciative of that. I wanted to be part of that story for pretty much the same reason as I wanted to be a part of this story, but for different perspectives. I wanted to be part of that story because I thought it was time that the world knew what these women contributed to NASA. I also wanted to be part of the next generation of young girls in STEM (Science, Technology, Engineering, Mathematics), and changing their dreams and how they dream themselves. So it’s a very humbling and exciting time. 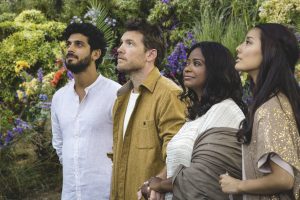 Q: You also recently did The Shape of Water with Guillermo Del Toro. What made you want to be part of telling that story and what’s it like working with him?

I’ve had two interesting meetings in my career. Interesting in the form of they’re supposed to 30 minutes and they turn into three hours. The first one was with Gil Netter for this movie and the second one was with Guillermo Del Toro. I have been a Guillermo fan since Mimic. He just owns the horror genre and really innovated it. To see him sort of go back to his roots with The Shape of Water, there are elements in the film that you’ll see that sort of go back to that genre because he’s been doing different things in and out of it. And I’ve seen everything he’s done. He is the ultimate father figure. He’s just love, pure love and fun, and he cusses better than anyone I know. He’s all about promoting healing so our rehearsal time was more like being on a couch with a shrink. And he’s somebody I will always love. They were really tight about… Everything was under wraps with the script, so until we start promoting it, I don’t feel comfortable talking about the film until I know what they want us to say. But I’m excited about. It’s very unique.

Q: Do you have a dream project you’d like to do?

I love looking for material. I call my agents just about every other week, when I read something to find out if the rights have been taken. I like doing puzzles and, to me, the job of a producer is a person who is puzzle-solving, bringing pieces together that should be congruent.

And that’s what I’m enjoying, is seeking those projects out. I just produced a film called Small Time Crime, which is going to SXSW (South by Southwest, Texas). I play John Hawks’ sister. It stars John Hawks, Anthony Anderson, Robert Forster and Clifton Collins. And I am producing Raven, which is about the Jonestown Massacre, with Vince Gilligan and Michelle McLaren, who is directing it. And I am producing and starring in The Madam C.J. Walker Story. There are a few more things I’ve optioned and I’m writing with a couple of writers, but that’s what I’m really having fun doing is finding materials, finding new ways to tell stories and finding people who haven’t gotten their shot.

Q:  On a personal note, I have to tell you I absolutely love the gowns you wear.

Thank you! I have to dress for my body, honey. And this is why we wear bubble shirts so you think, “That’s not her belly. That’s the shirt!”

Q: Do you have your dress for the Oscars?