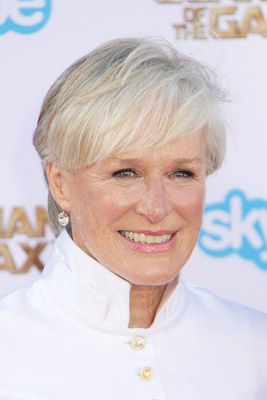 With over 50 film credits to her name, my personal favorite is Albert Nobbs where she excelled playing essentially dual roles as a woman pretending to be a man. Now in her new film The Wife, moviegoers are treated to yet another phenomenal Glenn Close performance. While the storyline itself was not that original for me personally as it reminded me one of the manga I read when I was young and still living in Japan. But I will say the one thing the film left me pondering even days later was, why. Why was she married, and more importantly, why did she stay married? The lingering questions weren’t so much from what was verbally stated in the film but more of what Close was able to transcended merely with facial expressions. You actually felt what her character, Joan was going through. That’s what makes Glenn Close so remarkable. After all, this is still the same actress who makes fans fear what’s inside unknown pots of boiling water 30 years after the release of her breakout hit film, Fatal Attraction. 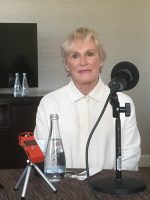 I chat with Close on the film, communicating a character’s emotions, and her actress daughter, Annie Starke

Q: Björn Runge (director) told us that you hesitated at first to do the film,  is that correct?

What he probably means, I wasn’t hesitant about wanting to do it. But I had a lot of questions about the character, without fitting. Once you put your name to something, and I think you’ll kind of get an instinct about a piece of writing. But yeah, I think one of the things that intrigued me was, for example, why she never left him. And in answering that question, because I wanted every other woman to understand that. I think working together around the table before we started work, we started to kind of lay the groundwork with this relationship and then the shooting of it was very organic and fab. 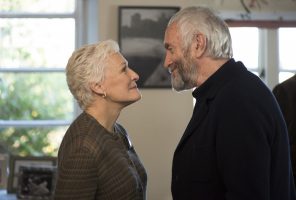 Q: Why were are on that, what was the reason that she didn’t leave?

I think in the beginning, they really love each other. They are just wildly in love. I really understand the scene where he says, “How can you love me if I don’t have any talent?” And then her instinct is to say, “But you’re wonderful, and I love you. And please don’t leave me because my life would be over. And I can fix it, do you want me to fix it?” And I think we all can relate to that kind of thing. And then, little did they know. And I think it’s wonderful that you don’t ever hear them say actually, Yes, fix it.” That their life went in that direction and there you are… 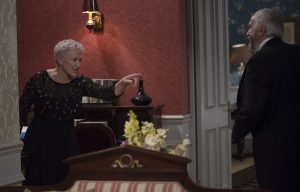 Q: How do you convey emotional silences in scenes on screen?

For me, a lot of it is my imagination. And putting myself, literally imagining myself in that position, and truthfully trying to react.

I’ve been in a film where the most difficult scene, which I only did once because it was so tricky. And I won’t say which film it is, but when I saw it I thought, “Oh man, I nailed it, I nailed it.” The camera was in the wrong angle. You couldn’t get my full face. And it keeps the audience from feeling that emotion. And that’s one thing that I’ve learned. With a master like Björn (Björn Runge, director) he knows how to record what we do.

Well, look at our scene together. Editing that scene is perfection. Because it’s reacting to each other. And if you didn’t have that precise, you know how the editing of, he says something and I react and I say something and he reacts. You could easily cut that scene… 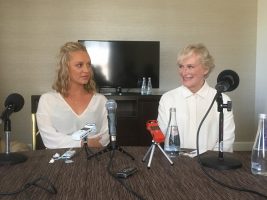 Q: What are your thoughts about your daughter Annie (Annie Starke) playing a young Joan? (Close’s character)

We have exactly the same walk. We’re both very pigeon-toed, always trying to straighten out our feet with the most unglamorous walk in the world. And you say “turn your feet!” [laughs]. So many people don’t realize Annie is my daughter and I love that. I really do. 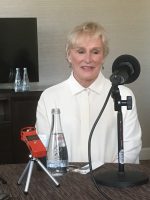 Q: Can you name one of your all-time favorite movies, and what is it about this movie that so special for you as a movie goer.

I like A Man for all Seasons. My favorite film. Why? Well it has brilliant writing. And I love what he says about the law. I was quoting it the other day. “If the devil turns around, and all the laws are flat, where will you be when the wind blows?” I think it’s kind of where we are in many ways in this country. So again it’s a timeless movie, and it’s also one of the great film performances of all time by Paul Scofield. Yeah I love what it says and I love the ending.

And I can’t wait to see Don Quixote. It is almost like out of the original illustration, thoroughbred originals, I know there’s like, I think illustration. I’ve seen a lot of that. Pen and ink, yeah.

The Wife opens theaters on August 17th in theaters nationwide. For more information visit the film’s official website at, https://sonyclassics.com/thewife/