EXCLUSIVE!! “Searching” star Debra Messing is grateful for her past, healthy and inspired for the future 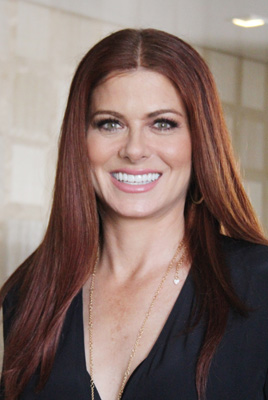 Over the span of my career I have interviewed a lot of talented professionals, but Debra Messing’s really got my attention. She was so well spoken with lively and energetic answers that if the acting thing doesn’t work out, she definitely has a future as a Publicist. In the meantime, Messing  plays a Detective and single working mom raising a problem son in the new film, Searching. A story about a teen that goes missing and a desperate father who breaks into his daughter’s laptop looking for clues that hopefully lead him to her.

In real life, Messing is single working mom raising a teenage son. I chat with Debra Messing exclusively on what it’s like trying to raise a son in today’s world, what the reboot of Will & Grace has been like, and some cherished memories of the late Debbie Reynolds who played Messing’s Mom on Will & Grace. 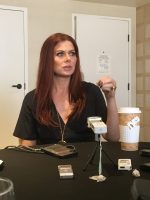 Q: So how is it being a single mother raising a teenage boy in today’s world?

Yeah, it’s a completely different world now. And whether we like it or not, our children are communicating to each other through devices. That’s how it works now. And I want to be respectful of what the norm is for kids but I also want to feel comfortable. And I am being responsible and protective of him. When I finally gave him a phone, I told him this is not your phone. This is my phone. And if you want the privilege of using my phone, then you need to know that I will pick it up at anytime, and look at all of your texts, and your search history, and your emails. And he’s not allowed to have Twitter or Facebook or Snapchat. He’s only allowed to have Instagram and a private account. So I can check and see who’s following him, and who he’s following. And so for me, every parent is different. For me, that was what I felt comfortable with. And I think it’s working out well. Doing this film obviously makes you have to pause and think, “Well, what don’t I know.” And you cannot monitor your child 24/7. And so you have to trust your child, and put in the boundaries that you think makes sense. And then you just have to pray that they’re safe. 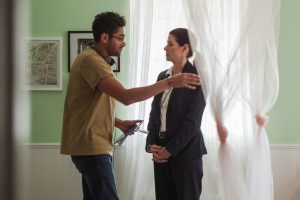 Q: So are about to turn 50 (she turned 50 on August 15th), you have a successful career, a well rounded son, won an Emmy, what’s next?  Do you still have some sort of bucket list for your life?

Coming upon this birthday, I have been reflective. And I’ve realized that I feel really at peace right now with my life, and where I am. In my professional life, in my personal life. I don’t think I have imagined that I would feel this sort of good turning 50. But luckily I do. I’ve gotten to an age where I feel very comfortable saying no to things that don’t interest me. Whether or not they’re projects or social commitments, I think I am more aware of how valuable your non-working time is. And that there’s really no reason to spend it with people who are toxic or in jobs that don’t feed you and challenge you and inspire you. And I feel like I am privileged because I am in a position where I can make those determinations for myself. I feel confident that even though I don’t know what the future holds for me in my career, I feel confident that things will come that will stretch me in ways that I couldn’t have anticipated, like Searching. Searching is a perfect example. I never would have imagined that anyone would have thought of me as their first choice for this role. Because it is so outside of the box. But it happened and I am grateful. And I look forward to more roles that sort of turn my public perception on it’s head. I think that was really fun. 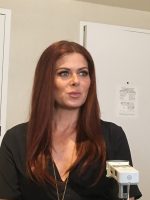 Q: And how about your personal life?

I’ve embraced a really healthy lifestyle over the last five, six years. Just really changing what I put in my body. I grew up on junk food, I mean really grew up on it. And it finally caught up to me that I realized for me to go on a set and work fourteen hours straight, that I did feel differently when I ate clean food versus sugary, fatty foods. That I never really believed that there was an association between food and energy. And I don’t know. Maybe I just didn’t want to believe it because I like my candy so much. But I’ve come to terms with the fact that there are things that I want to do. And I need to be healthy to do them. And I need to have energy to do them. And so yeah, I do make much healthier choices now.

Q: Has it been amazing to reunite with the cast of Will and Grace?

Yes, we are having a ball. We are laughing every single day which is such a gift. I think I had forgotten how healing it is to laugh out loud. And so to have the opportunity to come back and be with family, really, because that’s what everyone became after the eight years of working together. It just feels like kind of a miracle honestly. 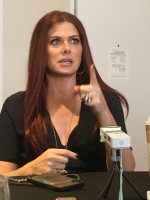 Q: So how was working with Debbie Reynolds, and what do you remember most about her?

She was a legend. The thing that really struck me was just her work ethic was extraordinary. Before she came to work, she met with my hair person and wanted to get the hair color so that we were in the same tone of red. So that it would really read like we were related. She really took it very seriously even though she’s fun and funny and bawdy and very, very like an old school broad. And I say that with just the most amount of love you can have. But she was also really inspiring because she would work eleven months out of the year touring her one-woman show. And here was a woman who, at the time was in her seventies, and was dancing and singing every single night. Live theater and then she’d fly and come and do our show. And I just thought, “God bless her.” And I just hope I have the kind of passion and enthusiasm and energy and just zest for life that she had when I reach her age. 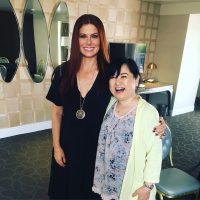 Q: How do you deal with fame?

I think of my celebrity as being a privilege because I have a platform. And I try to use it for pushing for equality. And I’m an activist and advocate for HIV prevention, and education and treatment in Sub-Saharan Africa. Using the fame that way feels right to me. I’m not interested in fame per se, just for the sake of it. I’m appreciative of every fan that comes up and says, “You make me happy.” And that’s a message that will always be welcomed. But my private life is important to me, and so when I am with my son, I have ground rules. Like I will not take a photo in front of my son. If my son is with me, it’s his time. And I will just say thank you and then move on. But if I’m at a work event. And we know that fans are going to be there, I’m thrilled to take pictures, and talk and sign autographs. So yeah I think for me, I have found a balance that I feel comfortable with.

Searching opened August 17th and is playing in theaters nationwide. For more information visit the film’s official website at, http://www.searching.movie/site/