“There are no such things as holidays with a capital H.” “The Boxtrolls” star Sir Ben Kingsley talks about his family’s holiday custom 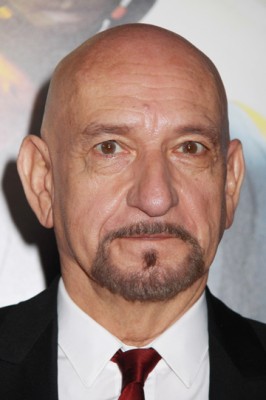 Sir Ben Kingsley plays a villain in The Boxtrolls. What fascinated him about his character and this story? Be prepared, he gave us a rich long answer! Also, he talked about the Kingsley family’s holidays.

Q: You haven’t done much voice work before, was that what attracted you to the role? And was it fun playing that kind of character?

I haven’t done much of this before and I was sent the most beautiful script which rang true. The honest starting point for a family film I think is a very bold, very mature move — orphans. And they go through a struggle. They fight some very dark forces and they achieve their own light, and their own friendship and their own future. To present this as a family film is very refreshing, because I’m sorry to say that I think family films often wipe off the top two generations of the family and say anyone taller than this table won’t like this movie. It’s stupid, because that’s not a family film. But this is and it will have resonance for all the members of the family that see it.

I say it’s rooted in truth because I can tell a good script from a bad. My training in my former years… I had no training, sorry. My former years as an actor were with tremendously good writers, one in particular, and therefore the way that this rang true, the way the patterns of human behavior in terms of loneliness, of longing, of care, of nurturing, of loss, of greed, of power, of indifference, they’re all there on the canvas. They’re all beautifully etched. So it was not a great leap for me to say, “Absolutely, yes,” to the script. Then I saw the drawing of the chap and saw that he was very different from me and therefore my voice would have to come from a different place. I’d have to find a voice that resonated from a very different place and would include all those frailties, those inadequacies, those longings, those addictions, delusions, narcissism, vanity. The guy’s a mess, held together by an absolute determination to be admitted into a club that does not want him. Because it’s so perfectly written, any actor would recognize, “Well, that’s the worst thing to do to that guy.” The worst thing you can do to that guy is to say, “You can’t come in,” because sooner or later, he’ll smash the door down. And he does. He demonizes a whole tribe of people who actually have nurtured and looked after an orphan beautifully, who are creative, inventive, loving, bonded. And they create their own civilization by what upper ground throws away. They never steal. They actually just use what is discarded and they make their world out of it.

So given that the character was so beautifully presented to me as a portrait artist, my portrayal involved finding a voice that was completely relaxed, not my own. So I invited the recording studio to build a kind of airplane seat. It took five minutes. They had everything in the studio. It took them five minutes. They had everything there — the reclining chair, something to put my feet on. They were great. Moved the microphone, moved the script panel, and I did the whole thing reclining, lying down. It also helped me not to make physical gestures. When we speak, we tend to augment our language with our mannerisms. If I did that, it would perhaps lessen, shrink, what I was giving the animators. If I had to push something with my physical gesture, it means my voice isn’t doing enough. So I was completely still, which I found very, very freeing, as you say. I didn’t impose many limits on myself other than of course the character’s journey and his narrative function in the piece. Tony was mostly in the studio with me in England, not in America, and he helped me a great deal by letting me know that certain vocal mannerisms that I acquired as the character were great gifts to the animator. He said, “The animators will love that. When you do that, they can do all sorts of extraordinary things with it.” So I played with elongating my vowel sounds. I played with putting the letter ‘H’ where it shouldn’t be in a word to try and sound posh. All those little mannerisms, he encouraged me to really make them part of my bit of the portrait. Then the rest of my portrait, which is unprecedented for me, is to say, “And the other department do my body language.” I’ve never done that before. It’s always been me that I delegated the whole lot, because I had to, to the animators, to the guys who work with these people. 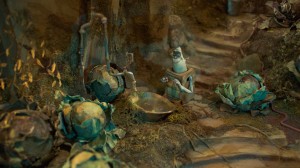 It’s very hard for an actor to answer that because an actor, my pattern of life is so random that there are no such things as holidays with a capital ‘H’ because I could be anywhere in the world and my children appreciate this. And as long as we keep in touch by email and telephone, everything is fine. No one ever says, “But it’s family.” No one ever says that. For me, that’s nonsense. Family is family over the internet, over Skype, over telephone. Love is love. You don’t actually have to go through a ritual to prove that you love somebody. They all know dad’s very busy and I’ve looked after them well. They’ve all got homes, thanks to good ole dad. They’re happy, safe and loved.