Thor: Ragnarok! star, Cate Blanchett is Kicking Ass and Enjoying Every Minute of It 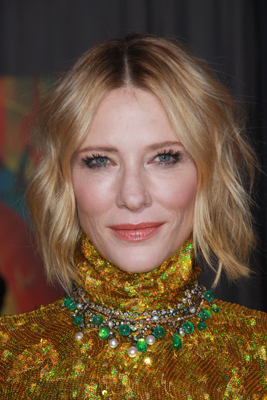 She is beautiful, talented, and has a display case full of accolades including two Oscars and three Golden Globes. But at the moment Australian actress, Cate Blanchett feels accomplished after kicking Thor’s ass in Thor: Ragnarok!

Q: How was it fighting with Chris Hemsworth?

I didn’t do enough of it. I kept wanting to do more. It was hugely enjoyable for me.  And apart from working with these guys, obviously, the chance to finally, in my deep middle age, to get fit, and to wear that much lycra was really exciting for me. But I worked with Chris’ trainer, Luke Zocchi for 20 minutes a day, which doesn’t sound like much, but my god, it was intense.  And Zoe Bell who is, I mean, an extraordinary actress in her own right, and director in her own right, but she was my…blessed every day with the fact that she was my stunt double, because when I started, I had to manifest these weapons out of my…

I’m not spoiling anything by saying that…Have I just lost my chance to be in the sequel? [laughs]  Well… I had to throw them in, and I could see Taika’s (Waititi, director)  disappointment as I threw it, I said, “Ha.” And I had to stop making the noises, because I’d go, “Ha.” And so I had to close my mouth.  And so eventually Zoe suggested that I put some sugar, which was deeply humiliating, sugar packets in my hand so at least I could throw something and be real. So Zoe helped me with little things like that. She was a great action director. So I moved from the humiliating to the exhilarating in a matter of five days.

Q: I understand you have a background in theater and there has always been a lot of Shakespeare running through the Thor movies. Have you ever played Goneril and do you think Hela would qualify as that style of character?

Well, yes, that’s quite a good comparison. I didn’t think about Shakespeare very much on this one. No, but it was great to, I think… just on a prosaic level, that the language had shifted, you know, enormously in this. It was just, just texturally, it was a huge departure, how much improvisation there was, and I’m really upset that the line “Dumbos” didn’t end up. Taika would just keep throwing lines. And there was one day when we’re on set, and I had, “I’m the Goddess of the Death, and what are you the God of, again?”

And Chris had said, “I’m the God of…” and Taika said, “Dumbos.” [laughs] That could make the cut in the movie…Yeah, so the language was quite different. But personally, I mean, I went back to two things, primarily. I went back to the extraordinary images that are there in the original comics, and then I went to the fan base, because there’s all these Hela fan girls who are doing these extraordinary make-ups online. And so when we were thinking about what she’d look like visually, I went to that. So I started with the visual, rather than the textural, I think.

Q: Did you have go-to song?

Yo, Gabba, Gabba! was kind of what… that was…”Don’t bite your friends”  was my entrance into Asgard. It was my – in a theme song. That led to my brain. You never know what’s gonna trigger an actor, you know.

For more info, visit the film’s official website at, http://marvel.com/thor or their official Facebook page at, https://www.facebook.com/marvelstudios/