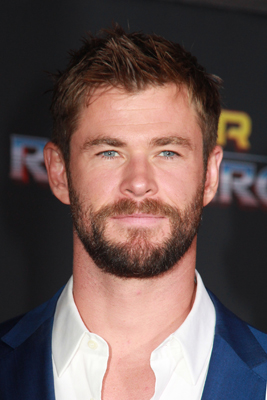 Chris Hemsworth has suited up to portray Thor five times, three of which have been with Thor as the staring Marvel character.  We chat with Hemsworth on what it has been like and how he enjoyed his bromance with the Hulk.

Q: What makes this Thor is different from the others?

Taika Waititi, basically. I think we all had a vision, and an idea, and a want to do something vastly different than what we’d done before, and take it to a different place. And that meant kind of doing away with what we knew, and just reinventing it, and it all came from his crazy, wonderful brain, and his inspiration, and him pushing us every day on set, and constantly encouraging us to improvise, and explore, and take risks.  And it was one of the most enjoyable experiences I’ve ever had on a set, and a film that I feel the most proud of, just because of this whole team, and the collaboration, and fun we had.

Q: There is a lot more dialogue in this film between you and Mark Ruffalo (who plays the Hulk) than in previous installments. Did you enjoy that new element?

I loved it. I think, this is my favorite version of the Hulk ..is it two… Because we actually got to act together, you know. We’d only really fought one another on screen in the previous films. And this time around, we got to just sort of improvise our way through it, and sort of invent this chemistry that we hadn’t explored before, and sort of build this new version of the Hulk, which was a little bit more articulate and vocal than he had been prior.  And there’s just so much more room for the humor, and fun that the character then embodies, that I think it’s fantastic. I loved it.

Q: Did you miss having your Thor hammer? We know how actors love props.

It was sort of good. It just helped kind of shed anything too familiar. You know, I feel like, well, holding the hammer, or even the wig in the previous costume, certainly just put me in a place, and set me on a path of what I already knew. And I wanted it to be unfamiliar, and so everything from the hammer, to the costume, the hair… made me, and allowed me to move differently, and forced me to move differently, and so that was a great thing. And… I don’t really miss it, no. I’ve got one at home. [laughs] It’s in the toilet, actually.

For more info, visit the film’s official website at, http://marvel.com/thor or their official Facebook page at, https://www.facebook.com/marvelstudios/