THOR RETURNS TO CONFRONT KING OF THE DARK ELVES 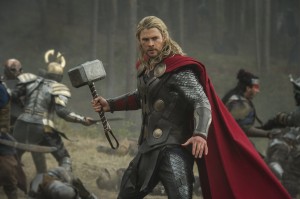 The Avengers’ resident Thunder God returns to theaters on November 8, 2013 in THOR: THE DARK WORLD. Having defeated the Frost Giants in his first feature, and an alien invasion force in Marvel’s The Avengers, Thor now faces his greatest challenge in the form of the Dark Elves, led by the evil Malekith — portrayed by Doctor Who’s Christopher Eccleston.

Chris Hemsworth reprises his role as Thor, rejoined by Natalie Portman, Stellan Skarsgård, Kat Dennings, and Rene Russo. And as no trip to Asgard would be complete without Odin, Anthony Hopkins is also back. And just as Loki will no doubt betray Thor, Tom Hiddleson will likely steal this picture as he did Avengers. Look for deeper character development in this sequel, along with an even more epic scale!