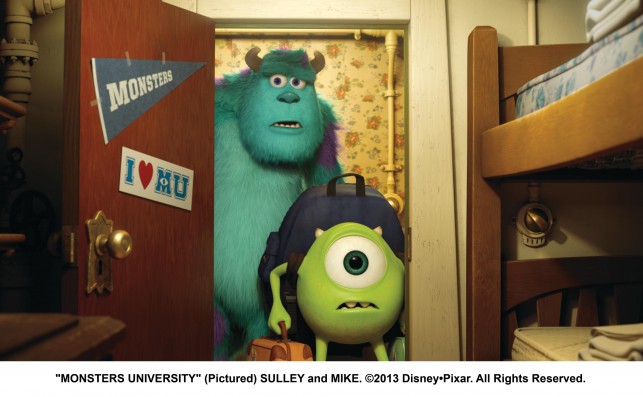 In this prequel to Monsters Inc., we see just how super-scare team Mike and Sully first met and became friends at university.  A shaky first meeting, accompanied by a pig loose in their room, shows how different these roommates are.  Scaring is a natural talent for Sully, who soon draws the attention of the big fraternities on campus, particularly Roar Omega Roar.  Mike, on the other hand, needs to study how to scare well, and is summarily dismissed by those same groups.  However, Mike and Sully both end up pledging to Oozma Kappa, which operates out of the basement of one of the member’s houses.

John Goodman and Billy Crystal return to voice Sully and Mike, the characters they brought to life on the screen twelve years ago.  This time they are joined by such talents as Nathan Fillion, Helen Mirren, and Alfred Molina. From meeting a new roommate, to fraternity rush and initiation, it would seem that university life is pretty much the same, be you monster or plain old human being.