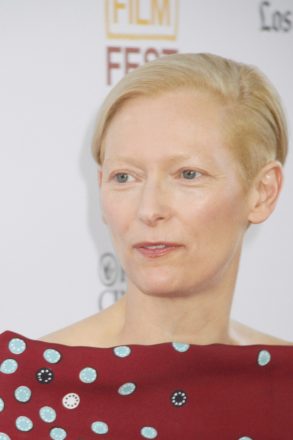 British actress Tilda Swinton has unique ideas with playing her character. In her new film Snowpiercer, she wears dentures, a wig and fake breasts to play the over-the-top-type character. How did she get these ideas? She revealed that and discusses her friendship with the director of Snowpiercer, Bong Joon-ho. 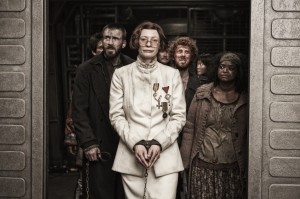 Tilda’s character, Minister Mason, has a very unique way of talking and she is kind of a clown. These ideas were inspired by one picture Tilda has.

“It is very interesting to try and analyze how Director Bong and I were able to work together, because it feels as if we made every decision together from the very beginning, when we first met. We first met; we became friends [snaps fingers] instantly (they met at the 2011 Cannes Film Festival), and we knew we wanted to work together. And then when we decided to try to make something with Minister Mason, which was Director Bong’s idea, it was like a challenge. He put down a glove [slaps table]. He said, “What do you think?” And then we just kind of dared each other. And I had these fantasies of this clown, which was based originally on one photograph that we found, museum lady, married with a person that I knew, a real person from my childhood. And then we kind of mixed in all the crazy clown megalomaniacs, cowards that the news channels show us every day, and we just kept throwing in elements.” 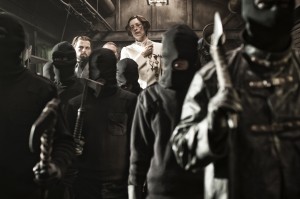 Tilda lives in Scotland. She invited the director and his team to her house. And she baked pie for them! (Tilda said the pie was fish pie and really yummy. She might tell us the recipe next time).

“The wonderful thing is that Dooho Choi (producer) and Director Bong and our wonderful costume designer (Catherine George) came to visit me in Scotland, and I had a pie for lunch. I picked them up at the airport, put the pie in the oven and said, “Okay, we have twenty minutes before the pie is warm.” We went into the drawing room and we played dress-up with bits of children’s costumes and ribbons and we made fake medals and had some glasses and we kind of got it in twenty minutes and then we ate the pie. So it took twenty minutes really. But it was so wonderful. As we were playing we had these ideas, like fantastic pendulous breast, and we just said that, and when I arrived in Prague there they were. And Jamie Bell loved wearing them of course. Our crew picture involves Jamie Bell wearing Mason’s breasts.” 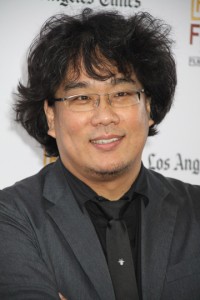 This film was a very international production. What was Tilda’s most interesting discovery on set? Director Joon-ho, who was sitting with Tilda at this interview, also added some of his enjoyment.

“As on most really inspired sets, we were in the nation of cinema. I think most filmmakers really love that fact that when you are on a set that is really kind of hopping and really humming, everybody is kind of in that nation. It is kind of really nation free. But yes, we had pretty international catering, didn’t we? Because we were in Prague, so we were in the Czech Republic. And there were a lot of Czech people around, but there were a few Korean people and some Scottish people. But we did have kimchi. There was a little table with some kimchi in the catering.”

“When I went to go see Tilda in Scotland, playing around with costumes, I had haggis. It was delicious,” Joon-ho said. Also on the set, he enjoyed Czech beers which were non-alcoholic. He seemed to enjoy drinking them during shooting.