What we can learn from John Chester, director, writer, producer, and star of “The Biggest Little Farm”? 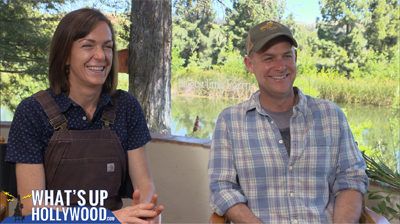 When I watched the trailer for The Biggest Little Farm, I was a little awestruck at the absolute beauty that was captured, and I knew right away this was not going to be an ordinary documentary. Before he became a farmer, John Chester, director, cinematographer, producer, writer for the film, has resume of DP for nature documentaries, so no wonder The Biggest Little Farm has beautiful shots.

The Biggest Little Farm stars John Chester and his wife Molly, who by the way was the one that initiated the idea of becoming farmers. John, who served as the film’s director, cinematographer, producer, and writer was the Director of Photography for nature documentaries. So it made perfect sense why this film had such stunning and storytelling shots.  I chat with the couple exclusively about their experience and what advise they would give to anyone looking to make a career change like they did.

Q:  What was the biggest lesson you learned by becoming a farmer? What would you like to share with people about the experience of farming?

Q: As a wife and husband running a farm together, what did you learn about each other?

Q: From a Hollywood DP to a farmer, and then becoming an Emmy Winner is a huge transition. What advice do you give to a someone who is standing at a crossroads in their life?

The Biggest Little Farm opens theaters on May 10th.

For more information and theatre locations, visit the film’s official website at,