While Ralph is breaking the internet, star John C. Reilly dissects it so it doesn’t break us. 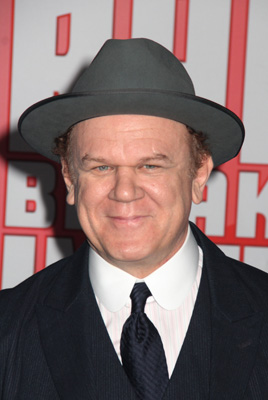 It’s a little surprising that despite him appearing in over 50 films, this is the first time I am sitting down with actor, John C. Reilly. First let me say, he did not disappoint. Not only was he amazing and inspiring, but his passion for his profession was infectious as well as his straight from the gut views on how the internet has impacted our lives. The film is undoubtedly entertaining, but the big surprise is the subtle yet powerful message and how much fans will connect with the characters. 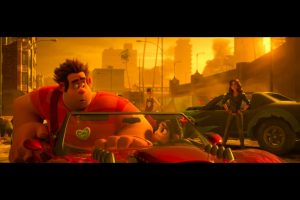 a vintage arcade character. What was that like for him to be thrust into modern technology of the Internet?

Well, I’m a vintage human being. I wouldn’t guess from the outfit. Yeah. The character, it was initially even conceived as a fish out of water, kind of character. That was a lot of what we played with in the first film.It was how does Ralph behave or how does any video game character behave in a game that’s not his own. And then the Internet is this literally infinite landscape. So, I don’t know. There’s a lot of really fun metaphors that we’re also playing with in the film. And this idea that the arcade is like the childhood kind of arena of their friendship and the Internet represents the sort of larger world beyond as they grow and mature. And Ralph(John’s Character), like you mentioned in your comment, Phil(Phil Johnston, Co-director), at the beginning, Ralph really worked so hard to get a friend in that first one. He’s like got it. Rest of life, solved. [laughs] And then Vanellope(played by Sarah Silverman) starts to grow and mature and realizing that she wants to feel like she belongs somewhere and it’s not her candy game. So, I think a lot of kids and adults are finding a lot of stuff in the film that they can really relate to in terms of the way relationships evolve. So, I think there’s something here for a lot of people. And certainly, a lot of jokes that operate on a lot of different levels. Yep. 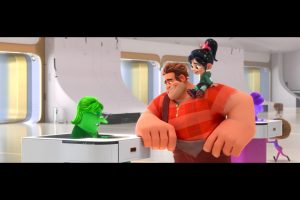 Q: With you and Sarah having worked together before, did you improvise and scenes that became part of the finished film?

It was a real treat to get into the studio again with Sarah. In a way, like our friendship has aged five years since the last film. So, it tracks in a way with Ralph and Vanellope. Sarah is not my only friend. One of my only friends. [laughs] But it was a real treat to be able to start at a place of intimacy with Sarah and with Phil and Rich(Rich Moore, Co-director) and Pam(Pamela Ribon, Writer) and everybody. We all kind of knew each other. And we learned how to work together on the first film. And we built these characters and the story together. So that when it came time to start this one, we could start from a very advanced place in terms of the kind of conversations we could have about the relationships and all that. And you can really see that in the film. I think I was one of the first people to insist that we try to be in the room together as much as possible. Because I know the way improv works, it works best in real time. So yeah. There’s a ton of improvised stuff, which Phil and Rich were very kind to just let us explore things every day. That’s one of the great joys of doing audio work. There is never the pressure of the sun going down. All of us recorded together. Definitely. Yeah. Your question was specific about me and Sarah. But certainly, I think that’s what sets both of these movies apart is that feeling of heart and real emotion. It’s because we’re looking into each other’s eyes. I’ve done other animated work where I didn’t meet the other actor ever. And I’m sure there is sort of practical people that say it doesn’t matter. It’s just a voice. But to me it does matter. I think it does come across in the film. It gives the film a soul it might not have if we weren’t there together. 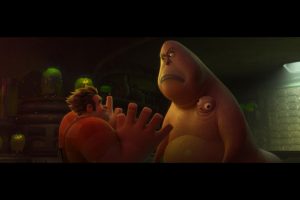 Q: Throughout time, you had some component of social commentary. How did you decide which social issues to feature and then do they impact the story or vice versa?

Well, I went into the… I’m sure everyone has something to say about this, but I jumped in first. I went in and met with the animators a couple of times to talk about the way Ralph moves,and also just to check in with them. And establish a relationship with them so that I could feel like I was working in concert with them. And I remember this one really moving conversation I had with them where I realized, the Internet is like the central issue of our time. Our relationship to this technology, its power, and its effect on us, we don’t even quite understand yet. It’s as powerful as like a nuclear bomb. But it uses other means. So, it was really exciting in the context of an entertaining Disney film to be able to talk about some of these issues in a really, real way. Its effect on people. Why do we crave the anonymous acceptance of people we don’t know? All of this stuff. The way we’re bombarded with commerce on the Internet. So, we made this fun entertaining story. But I think certainly you must have asked this question for this reason. That you come away from the film thinking about some of the most important issues of our time. 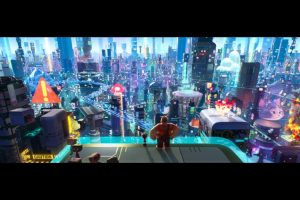 Q: What do you think kids are going to take away from this movie?

Among many things, first of all, I hope kids are entertained and feel like this story relates to them. And that they recognize some of their own friendships in these characters. But I do hope, you know when you do something unhealthy or something that makes you unhappy, and you just do it in a kind of mindless way. You get caught in these patterns of behavior. And then at some point, if you make a move towards being more healthy, you say, why am I doing that? Why am I doing that? And I think this idea of chasing after anonymous love, these hearts. In our movie, these hearts. Or this idea that kids are reaching out for acceptance from people they don’t know. And how that’s ultimately kind of an empty feeling. I hope that kids come away with that aha moment that I just described. Which is like why do I do that? Why do I want to do that? Because that’s the first step to really.Understanding a situation like that is asking yourself, personally.Well, why am I doing that? Maybe I can do something differently once you have that realization.

Ralph Breaks the Internet is currently playing in theatres nationwide. For more info on the film and theatre locations, visit the film’s official website at https://movies.disney.com/ralph-breaks-the-internet-wreck-it-ralph-2 or their official Facebook page at, https://www.facebook.com/WreckItRalph/