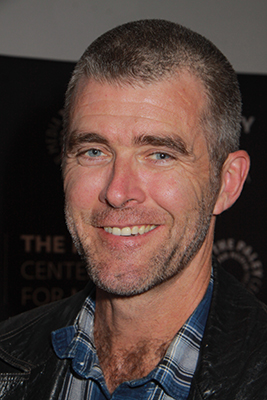 He first got our attention as the writer and creator of hit series “Prison Break” which aired on FOX from 2005-2009 and amongst a slew of other successful projects he now has our attention again for his novel The Far Shore. As we sit down with Paul T. Scheuring for our interview, he assured us that his inspiration to writing is having your posterior glued to a chair.  Paul’s supposed next film was written years ago and he is currently spending research on 19th Century grave robbers.

Q:On the subject of your book The Far Shore. You have been a writer for quite some time and are there any writers that helped inspire you through a phase of writers block?

Again I learned very early on in reference to the Hemmingway (“Ass to Chair”) is to just do the work. At once I’m not a huge fan of Hemmingway’s work. He was appealing to me when I was 19 but I am very much a fan of that idea of doing the work every day. Stephen King is very much like that. You can even throw it away, but if you don’t write anything, you don’t have any chance of hitting a home run because you’re not stepping to the plate. Obviously, on an artistic level that appeals to me in terms of what they’re writing and what their work is. I don’t know if that specifically addresses my concerns about writer’s block.

Q: What is your next step in your writing career from The Far Shore?

A lot. When you’re a young writer, you think you have all the time in the world and so if you’re not at a loss for ideas you will feel like you’ll always have ideas. I always felt like I had this broad horizon ahead of me, where I could explore all the ideas. I’m 48 now, and how many years do I have where my brain is really operating at a high level? I have to be very selective in terms of the things that I do. I can’t figure out a way of writing “Lethal Weapon 9.” Since the next book I’m going to write is about 19th century grave robbers in England, which is super fascinating. Of course everyone else is wondering how it’s fascinating, I’m saying, “Trust me, Prison Break wasn’t supposed to be a series, this will be fascinating.” 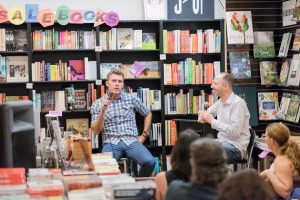 Q: Is that Den of Thieves or something else?

Den of Thieves is not me. Well Den of Thieves is a legacy project from my old writing partnership from 15 years ago. I believe my old partner is directing that in Atlanta (GA) but my name is on it. I haven’t looked at that script in 15 years. It was a little bit of a surprise to me when some guy called me up saying, “Dude I’m going to be in your film!” I said, “I’m not making a film” [laughs]. So my lawyer calls up and says, “Hey you know (Christian) Gudegast is making a film?” So I just said, “Okay, cool!” 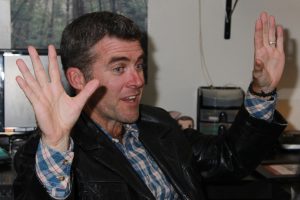 Q: So about the English grave robbers, what kind of research is going into the story?

Research honestly. If you read The Far Shore you’ll get a sense that I really like research because the discovery process in writing is for me, half of the reward of writing. Obviously just the euphoric creation of cool things out of the ether is the other half, but learning in the writing process about all these obscure things like the way prison operate or when I did a show about the “Klondike”. It was all about the gold rush and things like that. That’s a really great reward.

In the grave robber story, I was exposed to the notion that there are characters called, “the resurrection men.” Those were the grave robbers they were called “resurrectionists” and they would rob the grave and sell the bodies to the medical schools because the medical schools didn’t have enough cadavers. On some levels, they were doing something illegal to service something noble. Then you bring in the family of the deceased who doesn’t want their grave desecrated.

Now you have two people with countervailing positions and that’s a perfect recipe for drama. The last thing I would say about that is that the other interesting element is that you only have two weeks to get that body out of the ground. After 2 weeks back then, the decay would be too much for the medical school to work on. Now you have this ticking clock where you’re thinking, “I’ve got to get that body out of the ground in the next 2 weeks… (you’ve got) maggots and worms and that kind of thing.”

Anyhow, so those kinds of things are very interesting. That’s not a realized project yet. You find out these things like these families would hire thugs to guard the grave. That’s where the term graveyard shift term comes from. If our hero tries to go in there, the thugs kick their ass and all that stuff. Again it’s just the research process of writing which is one of the great rewards if you embrace it.