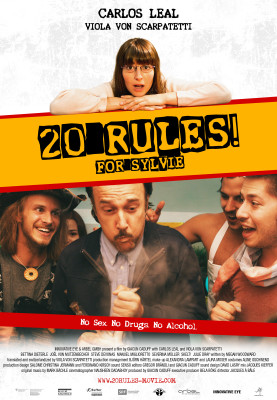 20 Rules for Sylvie, or in the original German Zwanzig Regeln für Sylvie, is a scintillating and daring comedy that begins in a tiny town in the mountains of Switzerland or “au bout du Monde” (“at the end of the world”), as the movie’s heroine Sylvie would say. The film, directed and produced by Giacun Caduff, is in both French (Swiss-French dialect) and German (Basel dialect), with English subtitles. 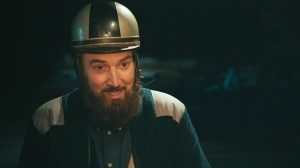 The two main characters, Adalbert and Sylvie, are very well cast. The story is centered on a very loving, but strict father Adalbert Gay (Carlos Leal), a widower. He has raised his daughter Sylvie (Viola von Scarpatetti), now 20, on his own, and desperately wants to protect her from the big bad world outside their tiny rural village. The problem is, Sylvie is about to leave home for the first time, to study medicine at the university at Basel. Adalbert is prone to moments of panic as he surveys the corruption and debauchery of life while flicking through the channels on his TV every night. He is terrified that life in bohemian Basel will corrupt his innocent daughter, a theme that will resonate with many nervous fathers out there. The lovable Adalbert takes his worries to extremes however, and gets himself so worked up with anxiety, that he frequently has to stick his head in the refrigerator to quite literally cool down. This is one of the many endearingly funny traits that poor Adalbert, superbly played by Leal, displays, as he struggles with the daunting prospect of being the father of no longer a little girl, but a young woman. 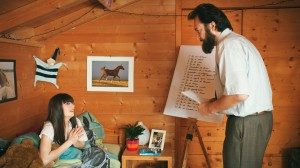 Leal showcases his talent and range as an actor and brings a sensitivity and subtle comedy to this role. We can’t help but empathize with the naïve and gullible Adalbert. In one of his extreme neurotic attempts, Adalbert tries to control Sylvie by making her sign a written agreement composed of 20 rules he devises — hence the movie’s title. What follows from the moment Adalbert shows up on the university campus in Basel to drop Sylvie off is a series of fortuitous and comedic events that are fast-paced and in some instances, frankly jaw-dropping. One thing leads to another, and before he knows it, the desperate Adalbert gets sucked into a world of college partying so debauched, that even his dog Alfonse has to cover his eyes. 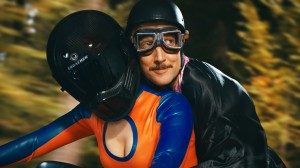 This is an interesting comedy that showcases some unique talent and a clever vision, despite it being a low-budget creation. The film covers a vast expanse of emotions and experience, and has an innate humor, that ranges from subtle and ironic, to much more overt and daring. The film is action-packed and fast-paced with meticulous attention to detail. It takes you from benign scenes in a pretty small mountain town where the brass band entertains contented locals, to some wild ones, including a mad dash on a motorcycle from Basel to the appropriately-named village of “Les Diablerets” (translated connotes devilment and mischief), with one of the main characters wearing nothing but a silk dressing gown and g-string! The film is rife with witty double entendres and with the exception of one too many pot-smoking scenes and college party caricatures, is rarely predictable. The film pokes fun at, but ultimately forgives, the hypocrisies of well-intentioned parents everywhere. Be prepared for an entertaining and raucous ride. Definitely one to remember. (Viewer discretion is advised due to adult content.)

“20 Rules for Sylvie” is on tour in the US and stops for a show on January 8th at the Downtown Independent in Los Angeles. More information about theatrical screenings, DVD and VOD release: http://20regeln-movie.ch/getit/