After 50 years of perfecting his art, a Master Craftsman finally earns the Limelight 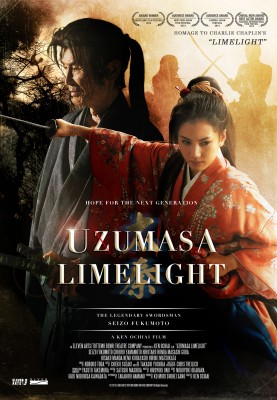 Uzumasa (Kyoto) is considered the Hollywood of Japan. It has produced many of the “jidaigeki” films so loved by many Japanese, and highly praised all over the world. 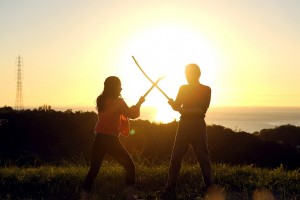 Jidaigeki means literally “period dramas,” and they are most often set during the Edo period of Japanese history, from the 1600s to the early 1800s. Jidaigeki depict the lives of the samurai, farmers, craftsmen, and merchants of their time. Jidaigeki films are sometimes referred to as chambara movies, a word meaning “sword fight.” The film focuses on one unique aspect of the jidaigeki genre — the kirare yaku. The “kirareyaku” are actors whose main job is to be killed by the lead star. These are men who are killed, without ever being the center of the limelight. Uzumasa was once home to over 100 kirare yaku. However, since the decline of samurai cinema, their numbers have dwindled to a mere handful. This story is about those men, the unsung heroes of classic jidaigeki films, as well as the end of this chapter in Japanese cinema. This is the story of an actor who loves and respects the art, and gives it his all, even as he sees his era coming to an end. Using Charlie Chaplin’s film Limelight as an underlying theme, the admirable story of these men dealing with a new generation and fading craftsmanship is told with melancholy and soul. 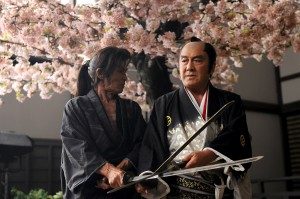 The movie centers on a long-running, much-loved series Edo Zakura. The film opens with a scene of the filming of Edo Zakura. It is a classic scene from the genre taking us back in time to medieval Japan. The cast of Edo Zakura is seen doing a stunning sword fighting scene. The main character, Kamiyama-san, is the hero of this movie. He is an aging kirare yaku actor. He is a master of the form, and he has perfected the art after many decades of intense devotion to his craft. We see him walking backstage after yet another perfectly executed take. Many other classical fellow cast members and crew are seen to greet him. He is comfortable and at home as he navigates the backstage world and the ancient streets of Kyoto. The clash of the old culture of Japan and modern Japan are seen head-on as he meets a young actor emerging from his dressing room. They greet each other, but very differently. Kamiyama bows, respectfully, and greets the young actor, who swaggers out of his dressing room and simply says, “Good morning,” in a casual confident manner. Kamiyama-san feels insulted and slighted. We know this from the subtle glance and nuance of his body language. An ongoing clash between the old and the new culture of Japan is a pervasive theme throughout the movie. The director shows a wonderful sensitivity and love of the honorable traditions of old Japan, as well as an awareness of what has been lost as the country has progressed in the last 50 or so years. 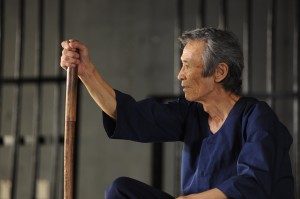 Kamiyama himself is an embodiment of the noble samurai spirit, which comes through in a myriad of ways as we watch him practice his art, in his interactions with his fellow actors, his rigorous self-discipline in his daily practice of his art, as well as his stoic acceptance of the fact that his world is fast disappearing expressed in numerous instances throughout the movie. Kamiyama is played to perfection by Seizo Fukumoto who is cast in his first lead role after over 50 years of being a real-life Kirare Yaku in Kyoto. His devotion to his craft is unparalleled. We see him day after day, practicing and perfecting his art with the religious devotion and discipline of the master craftsman. We can feel the love and respect that Kamiyama (and Seizo Fukumoto himself) has for the art of the Kirare Yaku in this beautifully filmed movie.

Of course no good Japanese story of a master craftsman would be complete without a portrait of the sacred teacher/student relationship. Uzumasa Limelight delivers in this regard. The young want-to-be actress Satsuki Iga (Chihiro Yamamoto) does not want to be just another female understudy. She wants to really learn the art of sword fighting. She makes the daring move to ask Kamiyama if he will coach her. The ensuing story that unfolds as well as the unique dynamic that develops between them is superb. There are some beautifully filmed and pivotal scenes with Kamiyama and Satsuki throughout.

Lovers of this genre will be thrilled by Uzumasa Limelight. The film will satisfy the desire for dramatic high-action, sword fighting scenes. Those who are familiar with the genre, and have celebrated classics such as the renowned Seven Samurai, will appreciate this unique look at the fascinating world behind the scenes as well as the skill required to create a piece of classic cinema. Uzumasa Limelight brings this world to the big screen with passion, sensitivity and reverence.

Uzumasa Limelight is out in theaters December 5th.