“Obvious Child” review: A romantic comedy for the abortion enthusiast 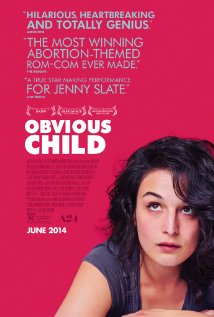 This is not your typical romantic comedy — obviously! Obvious Child glimpses the life of a single New York comedian contemplating an abortion (not exactly the fairy tale story, but perfect for an R-rated rom-com pregnant with humor).

Jenny Slate (Parks and Recreation) stars as Donna, a stand-up comedian who has just been dumped by her boyfriend, fired from her job, and the cherry on top is her latest one night stand has resulted in an unplanned pregnancy — gulp! As she deals with an overwhelming amount of pressure from her recent life changes and to boot from her polar opposite parents (Richard Kind plays a sarcastic laid-back puppet maker; Polly Draper is the business professor with an intense focus on her daughter’s concrete career plans), this is her coming of age story. Unapologetically herself, fun, and intelligent, Donna for the first time in her life must make a serious adult decision with equal repercussions, all the while flirty but weary of letting a new guy, Max (Jake Lacy, The Office), into her life.

Following the path of similar films like Knocked Up and Juno, this unexpected pregnancy comedy is a ton of laughs, but with plenty of heart at its core. Director Gillian Robespierre is flattered that people are talking and comparing it alongside such films she has had such enjoyment with, but she does want to make it clear her film is different. “Just because one movie is tackling unplanned pregnancy that ends in child birth, that’s a real narrative. That’s a story that happens.” Robespierre argues, “We’re tackling it in a different way, but also making it a comedy and using a genre that we love, which is romantic comedy.­­­­­­­­­­­­­­­­”

Though the social matter is serious, the jokes are sarcastic, and driven as far as you can imagine. Almost no character in this film is interested in ending any gag without adding their continuing quip. This gives the film its own and small world, where everyone is capable of brutal sarcasm, and luckily Robespierre has given us a peek into Donna’s intimate, unabashed world.