The American dream is re-envisioned in “American Milkshake” 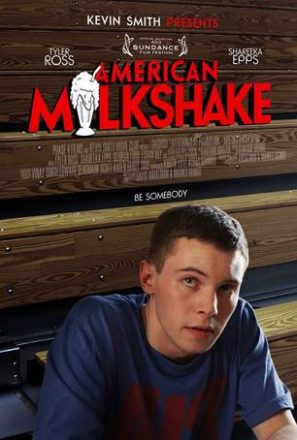 Jolie Jolson (Tyler Ross) has dreams of making his varsity high school basketball team, for the typical reasons a teenager would like to be on the varsity basketball team — popularity, to get girls, and advance his career in hopes of possibly playing pro ball one day. Jolie does have high hopes for himself, but a few of those hopes are a little more peculiar, possibly delusional.

This is the story of a well-off young white boy with a dream. It isn’t your average American dream either. Jolie would prefer having street cred than a steady career. In all essence his dream is to be black, at least his perception of black or ghetto which gets inverted at times by the friendships he forms with his fellow teammates. He wants to be cool like the black kids who live on Maple Avenue. He wants to play ball. He is attracted to his pregnant black girlfriend because she is a “bad-ass” ghetto girl, even though she does have white parents. That is why he sort of enjoys getting himself into “Jerry Springer”-type situations.

This is a story that is not simply to be brushed aside. The white boy wannabe-black stereotype is turned to film. It is not Malibu’s Most Wanted. It is far more based in reality, and driven by teenage angst, high school problems of college, relationships, pregnancy, and even a sex tape.

The voice over by Tyler Ross guides you through the head of Jolie and the film, giving light to his at times odd decision-making, funny even though it can very much be real.

Taking place in mid-’90s America, amidst the O.J. trial, the big Tyson fight, and the birth of the internet raises questions to Jolie and his friends’ futures.

You really want to like Jolie, and you do. You root for him. You’re happy when he makes the basketball team. His relationship troubles are comical and messed up at the same time. He seems like a good kid, smart (more book than street), who is just trying to figure his life out like most high school seniors, but he isn’t like most high school seniors. He is far more into Tupac, the NBA, and accepting a ghetto lifestyle than normal rationality. But, because of his heart and blind passion you root for him. And, you root for this film.