“Stephen King’s A GOOD MARRIAGE” forces us to ask whether we truly know anyone. 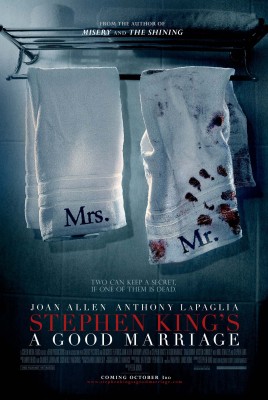 Directed by Peter Askin, “Stephen King’s A GOOD MARRIAGE” is a psychological thriller based on the last story from Stephen King’s 2010 collection “Full Dark, No Stars”. This is indeed a dark and disturbing tale and is quintessential Stephen King. Set in Maine, it is the story of a happy middle-aged couple, Bob and Darcy Anderson, who appear to have the perfect marriage on the surface. It seems too good to be true, and of course, it is. Tucked snugly behind picket fences and manicured lawns, sheltered by a cozy life and unsuspecting wife, Bob lives a double life as a notorious serial killer who has evaded the police for years. 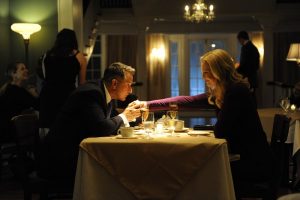 Anthony LaPaglia plays the role of the nondescript accountant convincingly. He switches seamlessly between the roles of devoted family man and egotistical sociopath who after his monstrous self is revealed, calmly explains his deviant behavior to his wife. There are subtle suggestions early on in the movie of a somewhat perverse dynamic between husband and wife such as when Darcy playfully calls him a “naughty boy”. This is repeated once too often but points to the deviant desires and truth that lie beneath. 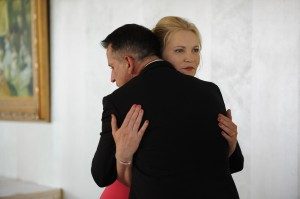 Joan Allen plays the role of the devoted wife and mother with ease, and we can empathize with her when she accidentally stumbles on the very ugly truth. We can feel her shock and revulsion when she realizes that her marriage of 25 years is based on not only lies, but pure evil. Though she quickly and carefully reacts by constructing a calm façade in the midst of her worst nightmare, the moments of horror come through in subtle glances and body language. Much of the psychological drama is devoted to the intense emotional struggle she deals with and has to suppress, in order to come up with a solution.

Because this story is from Stephen King, who also wrote the screenplay for the film, you might assume this to be purely the stuff of fantasy. The fact that this tale is based on actual events gives this film a more sinister aspect. King explained that he was intrigued by the notion that we can never really know another human being. This point comes through loud and clear in “Stephen King’s A GOOD MARRIAGE”.

“Stephen King’s A GOOD MARRIAGE” is on VOD and theatre now.