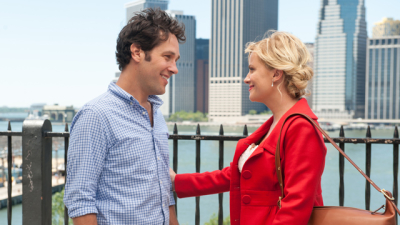 Director David Wain continues making outrageously humorous films. As he did with the cult classic camp-drama spoof, Wet Hot American Summer, Wain makes They Came Together, which parodies a number of romantic comedies.

This is for fans of Wain, for the fans of Wet Hot American Summer, for people who enjoy rom-coms, but are not going to be crushed by spoofing the many clichés of rom-coms. Paul Rudd and Amy Poehler are hilarious in the ways they usually are playing awkward and clumsy, but charming at the same time. The array of comedic actors in this film is crazy. From Bill Hader, Cobie Smulders, Max Greenfield, Ed Helms, Kenan Thompson, Michael Ian Black and Christopher Meloni, they all play their ridiculous roles right on the mark.

The film has plenty of physical humor, a wild silhouette sex scene, and of course overly exaggerated ideas that are run to the ground by rom-coms, but followed with unadulterated laughs. Wain keeps you guessing on how inappropriate he may get (clue: Sexual tension between grandma and grandson), and what kind of ridiculousness you are capable of laughing at.

They Came Together is a laugh riot and a can’t miss for Wain fans. It opens in theaters June 27th.