The Infinite Worlds of “What If…” – “Everything Everywhere All at Once” 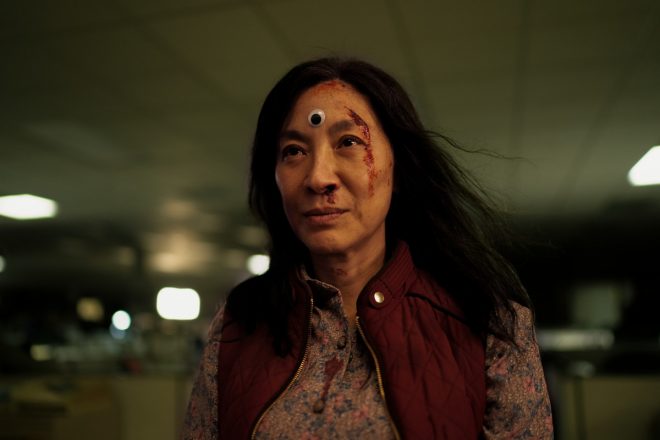 Sci-Fi action-comedy Everything Everywhere All at Once, which uses the idea of multiverse (multiple parallel worlds), a current trend in the film industry, was a hit. It had a long theatrical run and has since started streaming. And now, they have just re-released theatrically with unseen footage. The film has already reached almost $100 million in the box office, and is the highest-grossing film of the up-and-coming distributor, A24.

The heroine, Evelyn is played by Michelle Yeoh, a leading Asian action actress. As a former dancer, her Kung-fu action is sharp, elegant, and beautiful. The film fully captures her prowess. 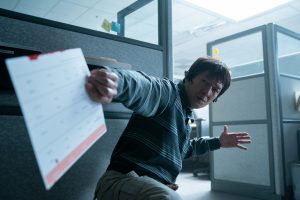 Ke Huy Quan, who plays Evelyn’s husband Waymond, was a popular child actor from his roles in Indiana Jones and the Temple of Doom and The Goonies. In Japan, he was so popular that a fan club was made for him. Appearing on camera for the first time in a while, he performed multiple versions of Waymond excellently and with cute charm, reminiscent of Jackie Chan. 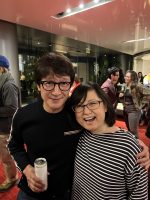 The story revolves around Evelyn, a hardworking yet exhausted Asian middle aged woman who fights to defeat evil by linking her consciousness to her alternate selves across worlds, or “verses” to gain unique skills. Upon learning that her alternate selves have each walked a different path in life, she comes face-to-face with the ideas of what could have been, had she taken different choices throughout her life. Along with her, we, the audience, learn of the infinite possibilities of the worlds of “what if…”. 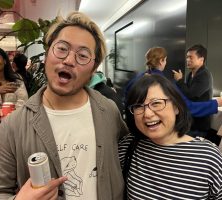 In recent years, Marvel Studios, which has created box office hit after hit (such as the Avengers series) has succeeded with using the idea of a multiverse. However, the multiversal scenarios of those superheroes seem otherworldly. This story of a middle-aged Asian woman experiencing the multiverse is relatable. This film has audiences reflecting on their own, personal lives, with questions such as “if I hadn’t married this person at that time…” spurred on by the introductions of alternate “verses”. By peeking into the lives of alternate selves who had taken a different choice in the turning points of her life, it makes us as the audience, along with Evelyn, contemplate whether our lives are a “success” or a “failure” we realize that whether we view our lives as a “success” or a “failure” largely depends on our own subjective point of view. A person’s “successful life” may be another’s “failure”.

Everything Everywhere All at Once 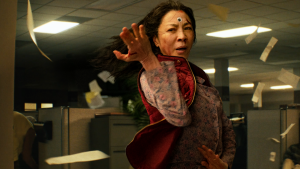 Evelyn, Chinese American, was having a terrible day. While her strict father had come over to stay, she faces an audit over the laundromat she owned with her husband, Waymond. On her way to their meeting with an IRS agent, her husband suddenly changes his personality, confessing, “I’m not your husband, at least not that one you know, I’m another version of him, from another life path, another universe. I’m here because we need your help”. While she doubts him, a dire situation quickly unfolds in front of her very eyes and she uses the Kung-Fu techniques of herself from another “verse” to fight off opponents one after another until…

Everything Everywhere All at Once, Now Available on Prime Video, Apple TV+  and more.

Returning to theaters with unseen footage on July 29th.