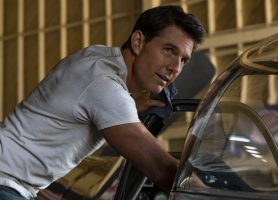 Tom Cruise is full of youthfulness which does not seem to match his soon to be 60th birthday.

The 1986 movie “Top Gun” hit both box office and billboard charts for the theme song, and became a social phenomenon. Also, literally, Tom Cruise made his international A-list star status unshakeable. Thirty-six years after that, the long-awaited sequel was finally released. Originally it was going to be released in 2019, but many circumstances including the pandemic postponed the opening date several times.

Famous for doing his own stunts as much as possible, Cruise once again gets on a motorcycle and  a fighter jet and he revels in a dynamic action scene. You can see that the juniors who plays the trainees are as young as his children and they get blown away seeing what Cruise does, both in character and as himself. The respectful eyes of the young co-actors in the film are not only for his senior star actor status, but also for his genuine spirit.

The aerial scene is so real that you feel motion sickness. When watching it on IMAX, the dynamic scene accelerates!

Cruise will reach his 60th birthday (in Japan, we celebrate a 60th birthday as kanreki*) in July, but we can feel his enthusiasm – almost as if he is saying “I’m still not defeated by young people!”. There are many moments when the personality of the character Cruise plays overlaps with his own personality. I am amazed at Cruise’s talent – the combination of being an actor and a producer who gave the greenlight to this script. I have interviewed him many times and each time I experience how Cruise is a person who fully understands what the “profession of a star” actually is. He does it thoroughly and completely. His professionalism shines through in this work as well.

For this film, movie fans are not only looking forward to seeing the aerial scenes (I recommend watching at IMAX theater) that almost give you motion sickness, or his over the top action, or his still hot looks (he is as handsome as 36 years ago), but also how Val Kilmer appears and plays his character, Iceman, who makes a strong bond with Maverick, played by Cruise.

Because Kilmer suffers from laryngeal cancer, he has difficulty speaking. I know you are looking forward to seeing how his character reunites with Maverick, and how the scenes are drawn, so the only spoiler I will give is: You won’t be disappointed because the scene is so perfect. There is no way to draw that scene other than what they made. You will be moved.

*It is said that the ten calendar signs (“Jikkan”) and the twelve signs of the Chinese Zodiac (“Jūni-shi”) complete one cycle when the birth year of the zodiac returns on a person’s 60th birthday, called Kanreki.

Pete “Maverick” Mitchell has returned to Top Gun School as an instructor who imposes rigorous flight training to a new generation of Top Guns so they are able to complete near-impossible top-secret missions. One of the trainees is the son of his deceased companion, “Goose”, revealing a feud …