Making sense of the casting for “The Batman” movie. 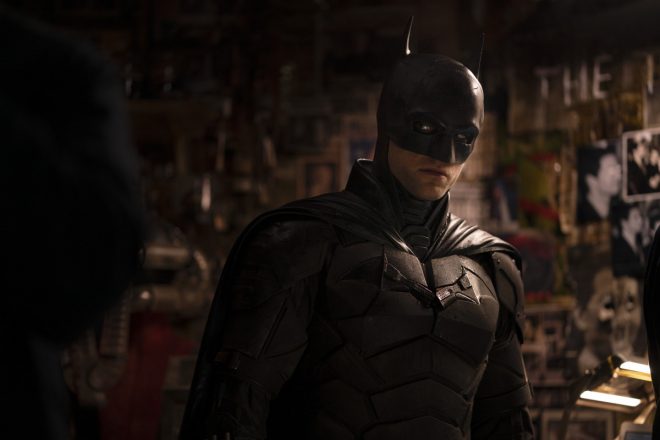 When I heard Robert Pattinson was cast as the title role of the new “Batman” film, I was sure I was not the only person who thought “This is a miscast”. Batman is macho and has excellent fighting skills, while Pattinson’s image and body type are the complete opposite–skinny, no muscle, and avoids fighting.

However, while watching the film, I realized I was mistaken. The Batman portrayed in the film is still young and his fighting skills have not fully matured, so he gets injured and suffers. He is still mourning, and the film depicts him as a melancholy character. The Bruce Wayne, a.k.a. Batman, character in the film overlaps Edward, the character Pattinson successfully played in The Twilight Saga, a vampire who fell in love with a mortal woman.

Bruce, who comes from a family of millionaires and possesses a gentlemanly attitude, tries to fill the hole in his unhealed heart with vigilante acts. His suffering is shown by the sorrow in his eyes. Pattinson, who played a similar character in the role of Edward, has his acting ability fully utilized as Bruce in the film.

My remaining concern was Pattinson’s body shape. His ultra-slim, zero-muscle appearance which was bashed in The Twilight Saga could be covered with a suit emphasizing Batman’s muscles, but the image would be ruined when the suit is removed and a weak appearing body is shown. That would make all the battle scenes appear as a sham. However, this time Pattinson built up his body before the filming, so he played the role perfectly.

The co-stars are also well chosen. Paul Dano, who has won numerous awards as a young talented actor played the villain, The Riddler. When he plays a nerdy and weird character, no one can beat him. 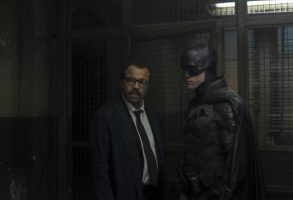 Jeffrey Wright, who plays Commissioner Gordon, is not only famous for his deep and distinguished voice but also for his acting ability in the “007” series. Every time he appears on the screen, the quality of the scene goes up, and the scene becomes more intense.

The film is a series of night scenes with almost unrelenting rain. Tension fills the screen from the beginning and the indescribable frustration fully expresses the character’s emotions without requiring words.

This work, which transforms a dark theme into entertainment presents a challenge to rival company, Marvel. Marvel has been producing mega hit films with full of rich entertainment with comedy elements and moving scenes that make you cry. 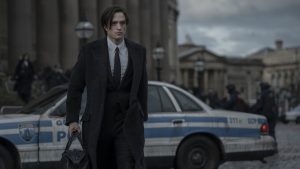 Please watch The Batman at the theater because most scenes take place at night and will not display as well on most home systems. This is a film you will want to be fully visually immersed in.

The mayor of Gotham City is killed by a person who calls himself The Riddler. Batman, who was asked by police commissioner Gordon to search for the criminal, meets Serena, a mysterious woman. Eventually, the two confront injustices and outrageous incidents infesting the city.