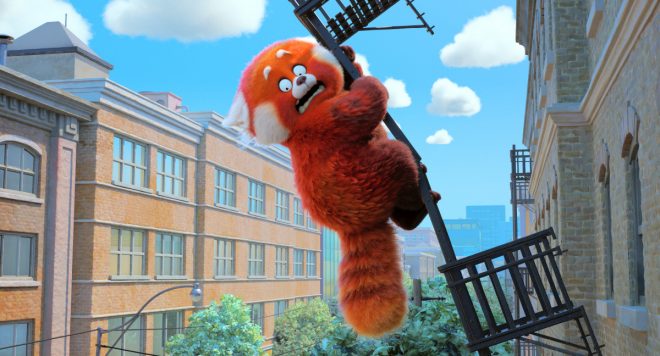 Everyone, especially women, experience adolescent body changes. But those changes won’t be as big as the changes the movie’s main character, Meilin, goes through. Born into a family where the family women transform into red pandas when they reach adolescence, Meilin struggles to deal with her “monster self,” even with the support and understanding of her friends. The idea is that accepting your true self and becoming fond of it, leads to the growth of the mind that we experience throughout our lives. This acceptance strengthens you mentally and takes you to the next level. 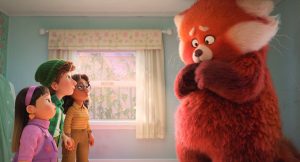 When I saw the poster, I said “Clever!” because the title has a double meaning. And when I saw the film, there are scenes and plots that made me think “Clever!”, so I enjoyed it a lot. In addition to the personal mental growth, the film depicts the energetic and delicate aspects of life for a 13-year-old Chinese-Canadian girl, and the changes in the mother-daughter relationship. There are also some comic elements, such as the fluttering eyes (excited large-eyed expression) when she sees what she likes. I was fascinated by the amazing talent which portrayed those emotions.

The director is a 34-year-old Chinese-Canadian woman, Domee Shi, who organized a mostly female main production team. It was a work which made the best use of the pop culture the production team grew up with. And since they are women, they portrayed the characters from their perspective and presented a unique depiction of each female character.

The red panda, into which the main character transforms, looks like a Japanese anime, unlike the strangely realistic drawings which Disney usually uses. The appearance, reminiscent of Totoro and Pikachu, is cute and makes you want to hug it. The production team thoroughly researched the “cuteness” and “comicalness” expressed by Japanese animation, such as facial expressions and the angles of the arms and ears. It can be said that many of the staff, including the director, grew up with Japanese animation. The influence of Japanese culture made me happy as a Japanese writer.

Disney is a company that continues to be very successful selling character merchandise from their movies. In the film, the Meilin and her friends make their income from the merchandise business using the red panda. It is the proof of promise of success, so this film itself is also a sales pitch for their boss (Disney!), which makes me think that this film is “Clever!” as well. The only flaw of the film I found so far is the shaman. I thought it was just a character created to end the story. It was the only disappointment of this almost perfect film.

Set in Toronto, Canada in 2002, the film is the story of 13-year-old Chinese-Canadian Meilin, who is an avid idol fan. Despite her overprotective mother, she has a good junior high school life with her three best friends. However, one morning, she transforms into a red panda and then panics. Transformation is an inherited trait of the women in her family and is the “change” they experience during adolescence. Can Meilin control herself, when she suddenly transforms into a panda when she gets excited or angry?